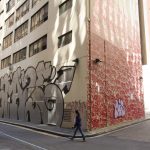 Barry McGee’s official commission for the Laneway Art program in 2011 was an untitled artwork in Tank Stream Way, opposite the entrance to Bridge Lane. The graffiti style painting, in silver with black outlines, reached more than a storey high and covered a doorway and several windows.

To read the work, viewers were forced to retreat down Bridge Lane, encouraging them to interact with the art, and simultaneously become part of the action on the street.

At the same time as producing this artwork, McGee provocatively produced a second uncommissioned artwork in Tank Stream Way adjacent to Pitt Street. This work consisted of a collection of red tags reaching over two and a half stories in height. After negotiating with the owners of the building, the second artwork was also included in the Laneway Art program.

Throughout his work McGee fuses together found and invented imagery, tags and assorted objects drawn from a range of influences – including Mexican muralists, tramp art, the graffiti artists of the 70’s and 80’s, and the San Francisco Beat poets – to create a unique visual language.

McGee’s artworks in Tank Stream Way bridged the divide between his gallery practice and street art, functioning not only as paintings but also as personal marks for McGee, emphasising his presence not only in the art world but also on the street.

Barry McGee was born in San Francisco, USA. He has a fine arts degree in painting and printmaking from the San Francisco Art Institute.

McGee’s work includes drawings, paintings and mixed-media installations. He draws much of his inspiration from contemporary urban culture and street art, and is highly respected in his field. His work has inspired generations of artists both locally and internationally, and his followers include skaters, surfers and graffiti artists as well as traditional gallery audiences.

McGee has exhibited his art across USA, Asia and Europe, including the 2001 Venice Biennale.