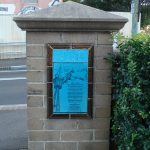 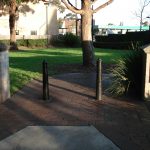 It is intended that the text and the images will create a tension (through irony, humour and pathos etc.) which will make each frieze carry a discreet and timeless meaning.

Green Ban Parks are two small neighbourhood parks at the corner of Erskineville Rd and Albert St, Erskineville. They are rare pockets of open space in an area of high-density housing, train lines and narrow back streets.

Between 1992 and 1998, residents campaigned to save the land from being sold by the state government for redevelopment. The Construction, Forestry, Mining and Energy Union (CFMEU) joined the campaign and placed ‘Green Bans’ on any private development. It was this action that saved the parks, which is how they got their name.

The tiles tell the story of the community activism that created the parks. Each frieze includes a panel of text and a screened image taken from archival and contemporary photographs, cartoons and drawings. Most of the text was drawn from the diary of Jim Plotrowski, an activist who kept a journal of the community struggle as it happened. There are also quotes from park users.

These artworks were commissioned by Sydney City Council in 1999. Michael Keighery and Kate Dunn found that there was very little documentation available about the history of the action to protect the parks. They drew heavily on the dairies of Jim Plotrowski and the photographs of Scott Wajon, another community activist.

The artists found that the challenge was to commemorate the park’s history while making the artwork relevant to today’s park users. They decided to try and achieve this by mixing humour with descriptions of the campaigners’ tactics.

As well as being decorative, the friezes are seen by the local community as a reminder of their long struggle to keep the parks.

The friezes are made of raku clay with copper alkaline glaze fired to 1100 degrees, surrounded by metallic raku clay glazed frames.

Michael Keighery, Head of Visual Arts Department, University of Western Sydney, Chair of NAVA, has ceramic works in public galleries in Australia and overseas, and is a long-standing local resident of Wilson St, Newtown.

Kate Dunn has worked extensively in South Sydney, particularly with young people, and is a professional ceramicist who lectures at TAFE.