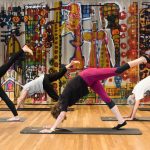 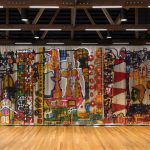 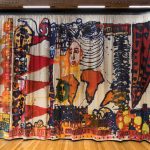 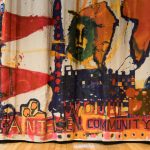 The project began with research into Woolloomooloo: historical events, the life of Juanita Nielsen and the inhabitants of the area. This research revealed a vibrant place rich in stories, events and imagery. Drawings and writings provided during several community workshops also directly informed the imagery depicted in the curtain.

Woolloomooloo is a unique textile public artwork – a 10m-long, hand-painted linen curtain that hangs in the Juanita Nielsen Community Centre in Woolloomooloo.

The curtain celebrates the unusual character and history of the local area, and commemorates the community centre’s namesake Juanita Nielsen – an outspoken local resident and publisher who opposed the eviction of Woolloomooloo residents in the 1970s. After running a high-profile newspaper campaign opposing ruthless development of the area, Nielsen disappeared suddenly in 1975 – presumed murdered by Abe Saffron, a local crime boss involved with the proposed development.

The imagery on the curtain includes portraits of Nielsen, as well as distinctive Woolloomooloo landmarks such as The Finger Wharf, ships at the docks, local archways and steps, and Nielsen’s house in Victoria St. The work also depicts important historical events including the ‘green ban’ protests which played a decisive role in halting development in the area.

Locust Jones drew inspiration for the piece from historical accounts and photographs, and from consultation with members of the community. He held a series of five collaborative drawing workshops with local residents, from children through to senior citizens – some of whom had known Nielsen and had personal memories of the community action to save Woolloomooloo.

“Some of the seniors knew Juanita personally, as well as her cousin. I also interviewed the head of police for the area at the time,” Jones says. “He said there’s a lot he knows and doesn’t know about the disappearance – and a lot he can’t talk about!”

The curtain is created from a custom-made 3m x 10m linen panel decorated with fabric dyes, pens and inks.

Locust Jones was born in Christchurch, New Zealand in 1963, and currently lives and works in the Blue Mountains, Australia.

He holds a Masters of Visual Arts from the Sydney College of the Arts and is known for his unique drawing style and the signature rawness of his work.

Jones has held more than 25 solo exhibitions within Australia and internationally, and has his work has been featured in numerous museum exhibitions across Australia.

His work is held in both private and public collections in Australia, New Zealand and Europe.