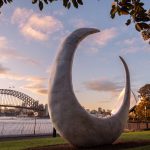 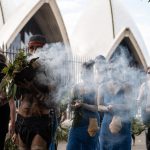 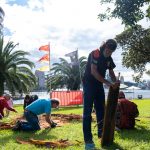 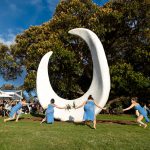 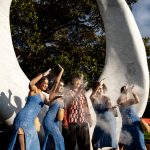 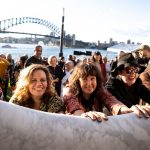 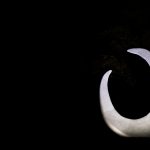 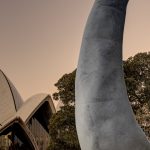 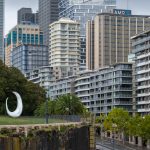 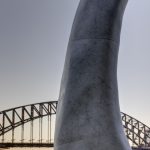 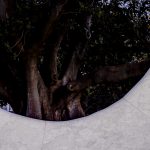 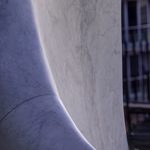 My concept for bara re-imagines ancient gathering spaces where people sat by fires on the headlands and feasted. bara provides a quiet space for ceremony, reflection and contemplation in a busy and ever changing city.

bara by Aboriginal artist Judy Watson is a major new permanent artwork to celebrate the First Peoples of Sydney, the traditional custodians of Gadigal Country.

The artwork takes pride of place on the Tarpeian Precinct Lawn above Dubbagullee (Bennelong Point) and honours clans of the Eora Nation and Elders past and present.

Featuring a monumental bara, the fish hooks crafted and used by Gadigal women for thousands of generations, the work has a gleaming finish reminiscent of local seashells. Women fished from their nawis (canoes) in the harbour, hauling in catches with bara tied with carrejun or carrahjun (bush string), to cook on open fires.

The crescent shape also reflects the shapes of the moon, the coves of the harbour, the sails of the Sydney Opera House and the arch of the Harbour Bridge.

This artwork is a powerful expression of Aboriginal cultures and a reminder of their significance for our nation now and for generations to come.

This site means a lot to the Aboriginal and Torres Strait Islander peoples of Sydney and the wider community. We will finally have a presence of this magnitude and an opportunity to share our culture, our history, and our knowledge with others who come to view it.

bara emerges out of an ancient and enduring Eora cultural context to eloquently express the nexus between the political, social and natural landscapes of historical and contemporary Sydney.

The cultural protocol of welcoming people to Country or acknowledging the traditional custodians of Country is at the heart of this artwork. It exemplifies this symbolic and deeply meaningful public gesture in a tangible and respectful way. This is especially important given the national significance of where bara is located, on the eastern shore of Warrane (Circular Quay).

While the monument has national relevance, the bara – or fish hook – also embodies a site-specific significance for the country and culture of the First Peoples of this region.

In developing her concept, Judy Watson adopted her internationally acclaimed practice of drawing inspiration from significant objects held in public collections. Bara from the Australian Museum collection provided the wellspring for Watson’s creative interpretation of the Monument for the Eora artist brief.

Eora presence is etched upon the landscape in many sites of ceremony and dwelling, pathways and trade routes. Fringing the deep harbour and ocean foreshore are galleries of rock art that attest to ancestral agency alongside middens of shells and fish hooks that annotate the timeless intersection of culture, community and Country.

At a headland ceremony overlooking Sydney Harbour, bara was unveiled in May 2022.

With food by Aunty Beryl Van Oploo and a nawi making workshop, a ceremonial lighting of fires by Tribal Warrior and moving performances by Burrundi Theatre for Performing Arts and Nardi Simpson marked the occasion.

Judy Watson was the 2015 recipient of the Australia Council’s visual arts award and her work is held in major Australian and international collections. She has exhibited widely over the past 25 years, including representing Australia at the Venice Biennale in 1997.

Judy Watson’s matrilineal family are from Waanyi country in northwest Queensland. Her oeuvre – which includes painting, printmaking, drawing, sculpture and video – is inspired by Aboriginal history and culture. It is often concerned with collective memory and uses archival documents to unveil institutionalised discrimination against Aboriginal people and hidden histories of Australia’s past.

The artist and her team at Brisbane-based urban art company UAP consulted with local Elders Uncle Allen and Charles ‘Chicka’ Madden in developing her concept.

Members of the City’s Aboriginal and Torres Strait Islander Advisory Panel and the Metropolitan Local Aboriginal Land Council were involved in the selection of the artist and have helped to shape and guide the development of the project.

The City of Sydney thanks Aboriginal and Torres Strait Islander Advisory Panel members (past and present), the Metropolitan Local Aboriginal Land Council and the Royal Botanic Gardens and Domain Trust.

Recognition in the Public Domain is one of the four key components of the Eora Journey. It aims to reactivate the knowledge of specific places and events in Aboriginal history at key sites within the city.

bara is the fourth public art project in the Eora Journey.