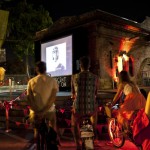 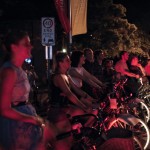 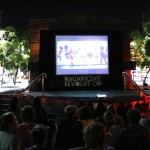 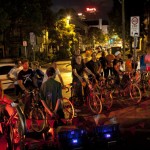 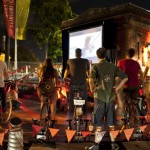 Through our work people start to make implicit connections between personal energy use, money saving, independence and climate change and start to build appreciation for energy.

Cycle-In Cinema was a three day project in Taylor Square that promoted renewable energy in an engaging way. Created by Magnificent Revolution Australia, the cinema allowed viewers to use bikes to power short films.

Imagine a drive-in with bikes instead of cars. This pedal powered cinema system used 8 bikes and 16 legs to power a 4000 Lumen projector and 400W of audio equipment for screening films or projections. Bikes were plugged into a generator, and individuals took turns riding to power the performance, ringing a bell when they needed a break.

On Saturday night the 25th, Burn Baby Burn, a program curated by Katrina Schwarz screened a range of cult short films and music videos by contemporary Australian and British artists.

On Sunday 26th was screened a curated program of new media including Indigenous voices from The Collage of Fine Arts. Together, the films and the cinema not only engaged viewers with important issues in society but also the importance of renewable energy.

Over 400 film and cycle fans attended the pedal-powered screenings over three nights. Taylor Square was transformed on Friday and Saturday and the wet-weather venue (at 1a Burton Street) was put to use on Sunday evening.

Magnificent Revolution Australia is a social enterprise established in 2010 to deliver pedal power events, installations and workshops that demonstrate the potential for renewable energy. MRA is a partner of London-based Magnificent Revolution, which has produced over 100 pedal-powered events across the UK and Europe.