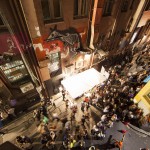 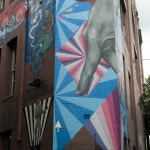 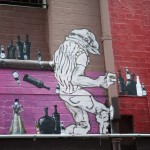 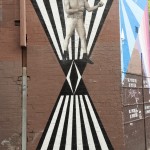 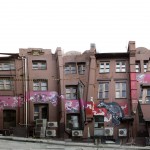 A parade where the street becomes a stage.
WE ARE HERE is an inclusive proclamation of present and past.

A spectacle inviting you in; you are here and WE ARE HERE.

The WE ARE HERE mural transforms Foley Street into a time-travelling, rambunctious romp through the complex history of the local area.

The mural WE ARE HERE is 15 metres high by 75 metres long and extends along the façade of Foley Street, running parallel to Oxford between Palmer and Crown Streets. The work – collaboratively executed by artists Sarah Howell, Dylan Demarchi, byrd, The Dirt and Gui Andrade – revives lost fragments of the area’s history and brings it firmly to the present. It takes its form from the hundreds of parades that have travelled up Oxford Street.

Originally a bush track that ran along the ridge between Botany Bay and Sydney Harbour, by World War I Oxford Street had morphed into a boulevard that joined the city to the suburbs to its east. The history of this street – how it came to be built, and the people who came to live here – emulates the history of the city. Foley Street edges along the lower reaches of Oxford Street and forms a kind of backstage to the main stage of the boulevard on the ridge. It is in lanes like this the life that supported the main street has played out.

The recurring motif throughout the artwork is hands, signifying the hand of the worker, artist, craftsmen, gardener and builder. At the beginning of the parade route the viewer is introduced to Larry Foley, an Australian boxer whose name is given to the street. It includes a section acknowledging the traditional owners and custodians of the land. Other sections represent victory celebrations and anti-war protests, federation celebrations in 1901, the Royal Easter Show Parade and the Mardi Gras Parade. Also included are areas representing thriving late nineteenth century business, the plague or ‘black death’ in the early 20th Century, and the diverse and shifting local cultures of the area. The mural finishes with another gigantic hand but it is a ‘victory’ sign this time.

Using paint, collage, mixed media, photography and stencil, the varied and contrasting mediums employed by the artists play with the inherent polarities of the Darlinghurst and Oxford Street narrative. The often dark and gruesome history is melded with times of celebration. The work rejoices in the swinging pendulum of its fortunes, from cultural backwater to creative epicentre, from slum to designer living, a place of protest to a place of celebration, from the six o’clock swill to sophisticated cocktail culture, criminal to respectable, addict-ridden to health-driven. This is an area that has seen and been it all.

While the work honours the past, it also firmly places a stake in the ground for the present, celebrating the renewed creativity that is re-emerging in and around Oxford Street. The artists and the culture creators are here once again, building it with their hands (or the click of a mouse) and proclaiming: WE ARE HERE.

Streetware began in 2010 and is an ongoing temporary program of street art commissions. It aims to revitalise the City’s laneways and public spaces and support emerging artists in Sydney’s creative community.

The fourth Streetware Program consisted of WE ARE HERE, a large collaborative mural by six artists reflecting the interesting local history.