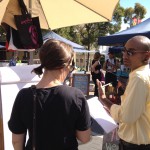 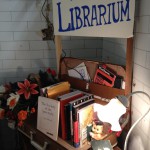 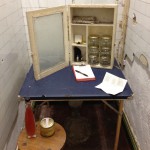 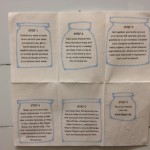 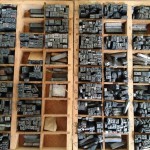 On the edges of an organic farmer’s market in the thick of the city, a curatorium of thinkers, activists and dreamers is assembled to catalyse another space of exchange, a subterranean ‘dark market’ trading instead in radical economies, growing cultures and craft futures.

A leaf from the book of cities by Makeshift was part mobile printing press, part think tank, part underground society. Makeshift is responsible for site responsive interventions and for this project they joined with the Sydney Sustainable Markets every Saturday in March 2012, to provoke new ways of interacting with urban and natural environments.

Temporarily occupying the historic former men’s and women’s conveniences, Makeshift transformed these underground spaces into a ‘market’ type installation that evolved each week.

At ground level, the disused women’s convenience hosted weekly meetings, creating a platform for re-thinking craft politics and futures, where creative thinkers from across Sydney came together to discuss their ideas for building a more sustainable future for the city.

They created a series of tactical gatherings, making time for sharing old and new strategies for rethinking and redirecting how we collectively sustain ourselves. Weekly conversations were directed by invited guests with expertise in a particular area. Market-goers encountered such exotic offerings as a jar swap gang, a fermentation club, a radical reading room and a ‘nu-craft’ think tank.

Makeshift’s final think-tank was broadcast through speakers positioned in the men’s underground toilets and the closing event included a performance by the Un-real Estate Agency, which examined how people occupy space and contribute to the city.

Downstairs in the old men’s facilities, Sydneysiders could enter an underground world of experimentation and creativity, crafting an experimental publication on re-crafting the city.

An antiquated hobby printing press turned these ideas into limited-edition artworks – typeset in situ as a series of short, provocative communiqués on the topic of ‘Craft Futures’ that were distributed to passers-by on the last weekend.

The Happy Quarter, a pop-up tea house, activated Taylor Square north by serving tea and conversation, engaging with the local community to exchange services rather than handover cash.

Tessa Zettel and Karl Khoe are Sydney-based artists and co-directors of Makeshift, who collaborate together on a wide range of projects concerned with enabling sustainable futures.

Their interdisciplinary works are characterised by mobility and making-do, often appearing as temporary, site-responsive interventions that activate public spaces and provoke new ways of interacting with urban and ‘natural’ environments.