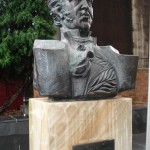 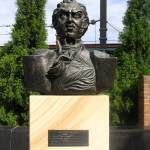 The bust of Colombian national hero Antonio Narino is made from bronze and stands approximately 20 centimetres high. It is placed on sandstone plinth of 1.5 metres tall by 0.5 metres wide. It is one of a series of busts of famous Latin American heroes on display in Plaza Iberoamericana on Chalmers Street commemorating the contribution of Spanish and Portuguese speaking people to the history of Australia.

Antonio Narino was born in Santa Fe de Bogotá, Colombia in 1765 and died in the small town of Villa de Leiva in 1823. He was educated in philosophy and law. This background established the fundamentals of an independence that served as the liberating force for Colombia. Narino was influenced by the ideas of the French Revolution and translated into Spanish ‘the Declaration of the Rights of the Man and Citizen’. For this he was imprisoned and then exiled to Spain, but later escaped.

This bust was presented to City of Sydney Lord Mayor, Jeremy Bingham and members of the Council by the Consul-General of The Republic of Colombia, Dr. Ciro Alfonso Arevalo Yepes. At the time, Yepes stressed that the valuable contribution from the Colombian community of Sydney through fundraising events had made the commission of the statue possible. It was unveiled on 16 March 1991.

A plaque on the sandstone plinth reads: “Antonio Narino / (1765-1823) / National hero of the Republic of Colombia. / Philosopher and man of law who advocated and / defended liberal ideals and translated for the / first time the universal declaration of the / rights of man and citizen, which served as the torch for liberty and independence of the nation.”