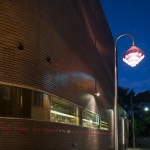 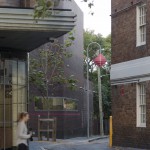 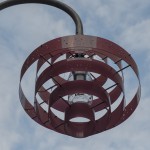 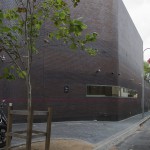 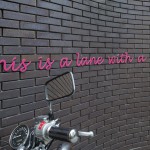 This is a lane with a name and a lamp in memory of the woman who survived being beaten and raped here. She happened to be lesbian. When the sun sets this lamp keeps vigil along with you who read this in silent meditation.

Lamp for Mary is an artwork by Mikala Dwyer located in Mary Place, off Bourke Street, in Surry Hills. It is the result of a community initiative to commemorate a violent act and takes the form of a large glowing pink street lamp, together with accompanying text.

The work operates on several levels, increasing safety as a positive legacy of the assault, creating a poignant tribute to all women who have experienced violence, and also acting as a sign of resilience and hope, lighting the way forward for equal rights for the gay, lesbian, bisexual and transgender community.

The City of Sydney invited artists to submit proposals for a new artwork, to be a reflection on the social heritage of the site, the community action surrounding the original artwork and support for its contemporary reinterpretation. It was also intended to energise the area as a space that is used on a daily basis, while engaging with the reality of the history of Mary’s Place.

Mikala Dwyer’s proposal was selected for its appropriate response. Her proposal conceived a “big glowing pink lamp” as a hybrid between public street lamp and lamp for the home, partly inspired by the domestic quality of the previous artwork. She envisaged that the light would act as a memorial to victims of violence as a “pink eternal flame” but would also serve to illuminate the dark lane and make the zone protective of its community.

The response to the artist’s proposal during community consultation was very enthusiastic, with an ensuing recommendation that the work should also include a commemorative text to contextualise the work and increase the anti-violence message. This idea was welcomed by the artist, who has used text in previous works, and she invited renowned writer and cultural theorist Professor Michael Taussig to compose the accompanying words.

A ribbon of pink laser cut lettering runs in one long line alongside and behind the lamp, attached to the wall of the nearby Beresford Hotel. It reads:

This is a lane with a name and a lamp in memory of the woman who survived being beaten and raped here. She happened to be lesbian. When the sun sets this lamp keeps vigil along with you who read this in silent meditation.

Dwyer is a very established and well respected artist based in Sydney. She is known for her installations and public artworks that combine a deft and playful use of everyday materials to create powerful environments.

In January 1996 a woman named Mary was abused for her sexuality, then beaten, raped and left for dead in what was then Flood Lane, Surry Hills.

She later found out that people in nearby buildings had seen and heard the attack but did not call police.

The community reacted with outrage and came together to reclaim the space.

Mary’s Place was officially renamed and an artwork unveiled in February 1997 as a ‘memorial’ to the violence that took place.

The project was jointly coordinated by the South City Council and the Lesbian and Gay Anti Violence Project.

It was the first place in Sydney dedicated to the display of a community’s commitment to ending homophobic violence.