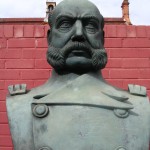 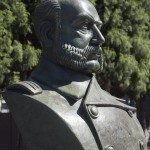 This larger than life-sized bronze bust of Miguel Grau Seminario sits on a striated sandstone plinth with a square base. Seminario is dressed in a coat that overlaps over his chest with military bands over his shoulders. The sculpture is located in the Plaza Iberoamericana on Chalmers Street (opposite Devonshire Street). It is one of a series of busts of famous Latin American heroes commemorating the contribution of Spanish and Portuguese speaking people to the history of Australia.

Rear Admiral Miguel Grau Seminario was born in Peru in 1834 and died in 1879 in Bolivia. He was a renowned Peruvian naval officer, and hero of the Battle of Angamos during the War of the Pacific (1879-1884). A strong supporter of the government of Manuel Pardo, Seminario was elected Deputy for Paita in 1876, and director of Peru’s Naval Academy.

When the war against Chile began on April 5, 1879, Seminario held the rank of Captain in the Peruvian Navy and was in command of the Huáscar. He played an important role in the sea campaign by interdicting Chilean lines of communication and supply, damaging, capturing or destroying several enemy vessels, and bombarding port installations. The manner in which he conducted these actions won him different honours.

He was killed by an armour-piercing shell fired upon Huáscar during the Naval Battle of Angamos on October 8, 1879. Although most of his body was not recovered, his remains were buried with honours in Chile and in 1958 brought back to Peru. A portrait of the Rear Admiral is on display at the museum ship Huáscar in Chile, along with portraits of two Chilean commanders who were killed on her deck.

In 2000, Miguel Grau was recognised as the “Peruvian of the Millennium” by popular vote.

An inscription on the sculpture bears the name Giurfa Lima, but it is unclear whether this is the name of the artist or a fabricator.

An inscription on the sandstone plinth reads: “ALM A.P. MIGUEL GRAU SEMINARIO / “THE KNIGHT OF THE SEAS” / PIURA 1834- ANGAMOS 1879 / NATIONAL HERO OF THE REPUBLIC OF PERU / GREAT NAVIGATOR OF THE SEVEN SEAS, EMINENT POLITICIAN, UNIVERSAL MAN / AND PIONEER OF THE HUMAN RIGHTS / HE DIED IN ANGAMOS DURING THE PACIFIC WAR ON 8TH OCTOBER 1879