The Waterfront by Michiel Dolk and Merilyn Fairskye 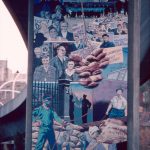 The Waterfront is one of eight murals painted on the sides of the railway pylons at Woolloomooloo, celebrating the history and people of this suburb.

It shows the harsh reality of life on the wharf in the 1900s, and the struggles of the people who earned their living there. Under the ‘Bull’ system, only the strongest, fittest and most obedient men were chosen to work each day.

Michiel Dolk and Merilyn Fairskye created this mural to ensure the story of the dock workers is never forgotten.

Painted using details drawn from historical records, newspapers, archives, photographs and the personal memories of the local community, The Waterfront captures the story and atmosphere of this important piece of Sydney’s history.

There were a total of 16 murals commissioned by the Woolloomooloo Residents Action Group. The murals were originally intended to last 10 years and have now been on display for over 25 years.