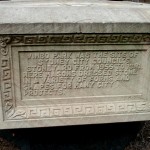 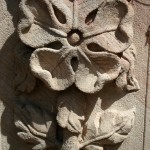 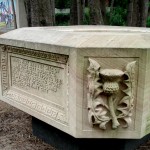 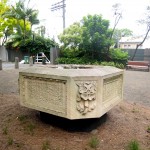 This octagonal-sided sandstone monument commemorates the site of Wimbo Reserve which was previously owned by Stewart Bros and used as a stone yard from 1915-1948. After this, the City of Sydney established the site for its own stonemasons’ and bricklayers’ depot and subsequently moved it’s depot to Ultimo.

It was proposed that a large block of Sydney sandstone, treated with several stone-facing techniques and bearing an explanatory plaque referring to the previous history of the site, be placed prominently in the park.It displays several facing techniques and has decorative relief work, including borders, thistle, clover, plants and explanatory text on all sides. The top of the object has a circular concave surface and it rests on a raised, black cement base.

Wimbo Park was the site of