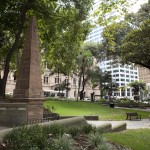 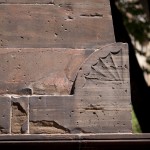 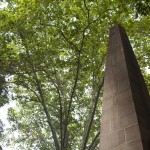 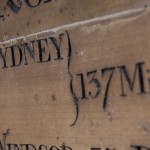 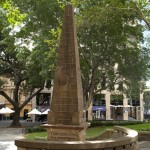 The Obelisk of Distances was erected in 1818 as an official starting point for measuring all the road distances in New South Wales, and it continues to perform this function today. Also known as the Macquarie Obelisk, it was erected by Governor Macquarie in what was then the geographic centre point of Sydney.

The monument was also the ‘symbolic peg’ indicating the furthest extent of the British Empire in the early 1800s. From a contemporary perspective it also reflects the process of superimposing European notions of time and space on the antipodean environment.

The Obelisk is apparently the earliest surviving monument in the colony, probably built by convict labour.

The monument it is a tall, tapering shaft of sandstone approximately six metres high on a rectangular base and pedestal. It is set below street level, approached on both sides by flights of steps, and surrounded by a ring of wrought iron railing.

The once prominent position of the Obelisk has been been eroded over time by the encroachment of roads. There was originally a surrounding wall which had design elements reflecting those on the Obelisk itself.

Francis Greenway (1777-1837) was an English architect transported to Australia for the crime of forgery, arriving in Sydney in 1814. In New South Wales he worked for the Governor, Lachlan Macquarie, as Australia’s first Government architect and is well known for buildings such as St James’ Church Sydney and Hyde Park Barracks, Sydney.

Major restoration works were completed in 2009.

Inscriptions on the South Eastern Corner side read: This Obelisk / was erected in / Macquarie Place/ A.D. 1818, / to Record that all the / public roads / leading to the interior / of the colony / are measured from it./ L. Macquarie Esq / Governor

From here the roads take measurement
That journey south and north;
From here o’er leagues and gleaming leagues
The Western Road sets forth.

Who stands beside this Obelisk
And dreams a quite a while
Shall see them moving, marching on
Mile after shining mile.

He shall behold them scarfing heights
And ribboning wide plains;
Now carpeted with summer dust,
Now wet with winter rains.

And he shall see, and thrill to see,
With mind and heart aglow,
Long wool-teams moving down their length,
Long grain-teams crawling slow.

Dream-gazing, he may glimpse dim shapes-
Stern, resolute, sublime-
The men who trod them ere they knew
The wearing of wheels of time.

And, musing still, he may discern,
Unaltered by the years,
The footprints left by them of old-
Our deathless pioneers.

Who stands beside this Obelisk
And dreams awhile may see
Australia radiant on the road
Of her bright destiny.