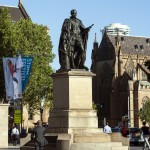 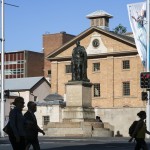 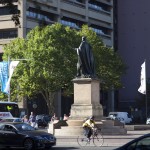 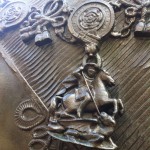 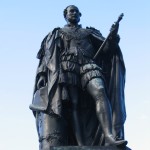 The sculpture of Prince Albert, also known as Albert the Good, was erected in 1866 and was originally located at the entrance to the Lover’s Walk, the central north-south axis of Hyde Park. The bronze statue of the Prince is approximately three metres high, and is positioned on top of a granite pedestal.

Prince Albert wears the robes of the order of the Garter. In his left hand he holds a sceptre and in his right an unrolled scroll. The railings around the statue are modelled on the universal trident, as used at the Exhibition of 1851. The plinth, made of Pyrmont stone, is approximately six metres by just under five metres, and is surrounded by projection pediments, on which it was intended to place lions.

The bronze is a copy of that originally executed in terracotta in 1865 by English sculptor, William Theed the younger, for the Royal Albert Infirmary at Bishop’s Waltham. William Theed (1804-1891) was born in Threntham, Staffordshire. He was educated at the Royal Academy schools, and won the Silver Palette from the Society of Arts in 1820. Although versatile and eclectic in his works, he specialised in portraiture, and his services were extensively used by the Royal Family.

The statue of Albert was purchased by public subscription. To procure the necessary funds, the Prince Consort’s Statue Association was established under the chairmanship of the Honourable Edward Deas Thomson, C.B., M.L.C. The statue was intended as a commemoration of British royalty and the British Imperial connection.

While the Association’s enthusiasm for the statue never waned, the public’s response was perhaps more equivocal, and the collection of subscription funds for the statue was protracted. Indeed an article in the conservative Illustrated Sydney News of 16 May 1866 reported that ‘a temporary want of funds’ meant that the statue was barely completed in time for the selected date of the unveiling ceremony.

Despite their somewhat half-hearted response to giving money, the public did seem to enjoy the celebration itself. According to the account in the Sydney Illustrated News, the streets were thronged with people from an early hour on 23 April 1866.

The statue was moved in 1922, possibly to the Botanic Gardens, during the construction of the City Circle train line. In 1987 he was again moved, this time to his now prominent position in front of Hyde Park Barracks, gazing earnestly at Victoria opposite.

An inscription on the granite pedestal reads: The people/ of/ New South Wales/ to/ Albert the Good/ Prince Consort/ of/ Queen Victoria/ 1866