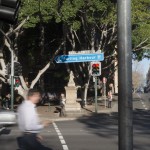 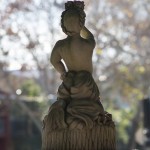 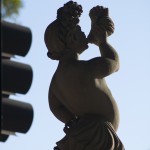 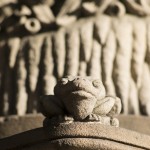 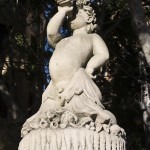 The Hordern Fountain was installed in 1896 on the corner of Pyrmont Street, Edward Street and Pyrmont Bridge Road as a gift to the city from Samuel Hordern, a prominent businessman. It is made from sandstone and features a cupid standing on a stepped base. On two sides semi-circular drinking basins are positioned centrally below marble inlaid tablets on which inscriptions appear. Jacek Euszczyk sculpted the cupid and W P McIntosh constructed the base. While it still remains in its original location, the fountain is no longer in working condition.

How the fountain came to be

In March 1896 at a time when drinking water was scarce in the colony, Samuel Hordern wrote to the Sydney City Council ‘offering to the Mayor, Alderman and citizens of Sydney, a piece of land bounded by Pyrmont Street, Edward Street, and Pyrmont Bridge Road, and to erect a fountain thereon, under the supervision of the City Surveyor, for public purposes’.

It was recommended that Council approve the offer and a letter of acknowledgment was duly sent in April 1896, informing Hordern that the Sydney City Council had approved the donation. In January 1897, the Town Clerk reported that on the ‘piece of land’ specified and gifted by Hordern, a public drinking fountain had been erected at Hordern’s expense. The work was carried out under the supervision of Mr Richards, the City Surveyor.

In 1923 it was proposed that the Hordern Fountain be removed ‘on account of its battered condition’. On meeting with the representative of the late Samuel Hordern, the City Surveyor was charged with the decision and authorised to ‘take such action as he may consider desirable’. Since the fountain remains in its original position, presumably no action was taken to remove it.

Inscription reads: This land and fountain/ presented to/ the Mayor, Aldermen/ and citizens of Sydney by/ Samuel Hordern 1896/ Isaac ellis ives mayor

The Hordern Family dominated the Sydney retail trade throughout the second half of the 19th century and into the 20th century.

Beginning with a small drapery shop ‘Mrs Hordern’s’ opened by Anthony Hordern in 1823, it grew to become Anthony Hordern and Sons, the largest department store in Sydney.

The Hordern Empire grew to include the ‘Palace Waterhouse’ and the ‘Palace Emporium’ in Brickfield Hill, with offices in Britain, Europe, America and China.

While the brothers, Anthony and Samuel jointly inherited the business, Anthony’s death in 1886 left Samuel sole proprietor of the Emporium in Haymarket.

At his death in 1909 Samuel left an estate of almost £3 million.