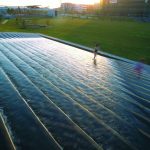 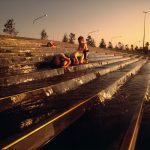 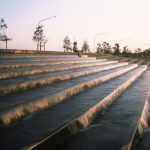 Storm Waters reminds us of the drama of the storm whilst highlighting the concerns of urban pollution. Its sculptural form emphasises the water detention function of Joynton Park and hints at the significant Sydney aquifer that lies just below its surface.

Storm Waters consists of two sets of concrete water stairs set into the sloping embankments on either side of Joynton Park. Set at a specific angle, water is trained gently sidewise, causing it to defy expectations and fall diagonally down the stairs.

Joynton Park, in Zetland, was originally part of a chain of wetlands that stretched north from Botany Bay as far as Redfern. In 1906, it was drained to leave a corridor of natural peat, which contrasted sharply with the surrounding sand hills.

From 1908 to 1944 the Victoria Park racecourse operated on this site. Joynton Park, named after Sir James John Joynton Smith who operated the racecourse, was formed during the residential subdivision of the area in the 1990s.

Storm Waters – a subtle reminder of the park’s wetland origins – is an integral component of Joynton Park’s sustainable water treatment process. The water that flows down the stairs is recycled and purified storm water that has been harvested in swales on site, and treated in a non-chemical, electro-magnetic filtration process. At the bottom of the stairs the water runs through metal grates into drains to be recycled once again.

As well as being both functional and decorative, the stairs of Storm Water are welcoming and interactive, a popular spot for visitors to rest and children to play on warm days.

Jennifer Turpin and Michaelie Crawford are award-winning artists whose work focuses on the design and production of site-specific kinetic artworks in the public domain. Their practice is based in Sydney, where they have more than 18 years’ experience at the interface of art, science, nature and the built environment.