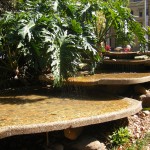 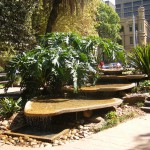 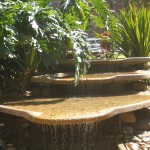 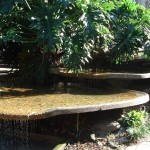 A descriptive plaque is located approximately 1 metre north of the top of the fountain. The fountain was installed in 1962 in northwest corner of Hyde Park.

Busby described the water as ‘perfectly transparent and colourless, free from every taste and smell, and so soft as to be fit for washing and every other domestic purpose’. At that time, Sydney’s water supply was at best uncertain and the town had experienced a series of crises in its water supply due, in part, to drought.

Busby’s scheme to tap the Lachlan waters was adopted late in 1827. It was built by convicts and took some 10 years to complete. From 1830 the work, though unfinished, fortuitously provided significant quantities of water for public use as ground water filtered into the tunnel and seepage springs were tapped. The bore was Sydney’s sole source of water until 1859.

John Byrom was an architect. He won a public competition to design the memorial, conducted by the Sydney Fountains Committee of the Sydney City Council.

On a plaque located approximately 1 metre north from the fountain, an inscription reads: “This fountain was provided by the Council of the City of Sydney to commemorate Sydney’s / second source of water / and its first piped water supply. / As the Tank Stream, the original source of water, was dwindling and had become befouled, Governor Darling in / 1826, directed the Government Mineral Surveyor and Civil Engineer, John Busby, to undertake / the task of / increasing the water supply to Sydney. John Busby proposed and supervised the construction of a tunnel from / Lachlan Swamps (now Centennial Park) to a position in Hyde Park opposite Stanley Street and near College / Street. Work commenced with convict labour at Hyde Park on August 15, 1827. The tunnel was / completed in May, 1837, and was approximately 12,000 feet long with an average cross section of 5 feet by 4 feet. It cost 24,000 pounds / to construct, and delivered up to 400, 000 gallons daily. Water was carried by pipes, supported on trestles, from / the tunnel end to an enclosure near the corner of Elizabeth and Park Streets until 1844, when pipes were laid / from the tunnel to various parts of Sydney. The Bore remained Sydney’s sole source of water until 1859. / The Fountain was placed in operation by / Lord Mayor of Sydney / Alderman H.F. Jensen/ on 26.10.62. / J.H. Luscombe / Town Clerk / Designer: John Byrom – Architect.”