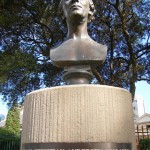 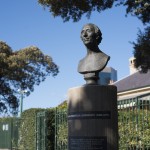 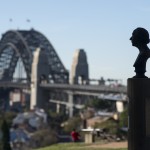 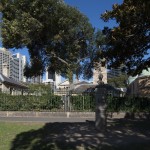 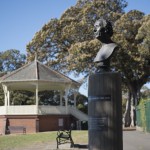 A bust of Hans Christian Andersen made from bronze and mounted on a vertically textured, elliptical sandstone plinth. There are engravings on the bust including the name of the subject and a few undecipherable numbers and letters. There are also a number of inscriptions on the plinth.

The bust is a replica of the famous sculpture created by the Danish sculptor H W Bissen in 1865. It is located at the edge of Observatory Hill Park, looking over the harbour facing away from the observatory and towards Denmark.

Hans Christian Andersen was a Danish author who is best remembered for his fairy tales. He was born in 1805 and died in 1875.

Herman Wilhelm Bissen was born on 13 October 1798 and died in 1868. He first studied painting in Copenhagen, and then became a pupil of the sculptor Bertel Thorvaldsen. In 1824, he travelled to Rome and met Christian Daniel Rauch in Berlin.

Under the influence of Thorvaldsen, his style changed from romanticism to neo-classicism. Back in Denmark, Bissen became professor at the Academy of Arts, Copenhagen in 1834, changing in style to realism. He created the bust of Hans Christian Andersen of which this sculpture is a replica, in 1865.

A plaque in the middle reads: “This bust was unveiled on the 7th of March 2005 / by HRH Crown Prince Frederik of Denmark / and HRH Crown Princess Mary of Denmark / in the presence of / The Lord Mayor of Sydney Clover Moore MP / to celebrate the bicentenary / of Hans Christian Andersen’s birth”.

A plaque at the bottom reads: “IF EVER A MAN PREACHED JUSTICE AND MERCY / AND LOVE OF HUMANITY, IT WAS HE. / HE WROTE FOR THE MAN IN THE CHILD / AS NO ONE ELSE HAS EVER DONE / Dame Mary Gilmore”.

On the back, a plaque reads: “Once upon a time…In 1955, the Danish community of New South Wales donated a / bust of Hans Christian Andersen by Australian sculptor Wendy Solling / to the City of Sydney to commemorate the sesquicentenary / of the author’s birth. The bust was located in Phillip Park.

In 1984 plans were made to relocate the bust to Wynyard Park / but to everyone’s surprise, it was no longer there! A world-wide / search was held, and reports located it in far-fetched places, but / unfortunately none of them were true and the location remains / a mystery to this day.

This plinth and the plaque containing the quote by Dame Mary / Gilmore are all that remains of the original monument.

In 2004, the Danish community in Australia commissioned this / bust, to be presented for the 2005 bicentennial celebrations. / It is a replica of the famous sculpture created by the Danish / sculptor H W Bissen in 1865.

This 2005 bust is located within Observatory Hill Park looking / towards the harbour and over the oceans to Denmark.”

This artwork was commissioned in 2004 by the Danish community in Australia to be presented to the City of Sydney for the 2005 bicentennial celebrations of Han Christian Andersen’s birth.

Another bust of Hans Christian Andersen was given to the City of Sydney by the Danish community of New South Wales in 1955 to commemorate the sesquicentenary of the author’s birth.

This bust was created by Australian sculptor Wendy Solling (1926-2002) and originally located in Phillip Park.

In 1984, when plans were made to relocate the bust to Wynyard Park, the bust was discovered to be missing.

A worldwide search was held, and reports located it in far-fetched places.

Unfortunately however, none of them were true and the location remains a mystery to this day.

The original plinth and the plaque containing a quote by Dame Mary Gilmore are all that remains of the original monument.