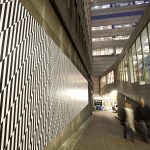 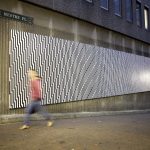 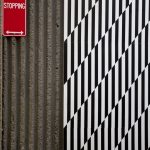 Warriors was a temporary laneway artwork that comprised a large rectangular billboard fixed to the northern wall of De Mestre Place. Pasted to the billboard were a succession of black and white posters, with mesmeric repeating graphic patterns.

The patterns provided a striking contrast to the monotone beige wall behind the artwork. To those moving up or down the sloping laneway beside the billboard, the shapes and patterns appeared to shift and move.

The work was designed to enliven this dark lane and make the views from nearby Hunter Arcade and George St more intriguing and stimulating.

Much of van der Ploeg’s art involves the transformation of unnoticed and unconsidered public spaces – stairwells, carpark columns, corridors and the oblique side walls of buildings. Once overlaid with van der Ploeg’s monumental graphic designs, these transitional spaces become places of visual interest, and destinations in their own right.

Jan van der Ploeg was born in The Netherlands. He studied at the Gerrit Rietveld Academie and the Rijksakademie in Amsterdam, and the Croydon College of Art in London. He lives and works in Amsterdam.

Van der Ploeg’s work has featured in numerous solo and group exhibitions in Europe, USA, Mexico, Australia and New Zealand. It is also held in multiple collections, including at the Dutch Embassy in London, in the Sarah Cottier Gallery in Sydney and in the Gallery Gerhard Hofland in Amsterdam. In 1990 he won the Royal Award for Modern Painting in The Netherlands.