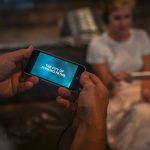 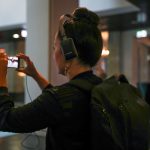 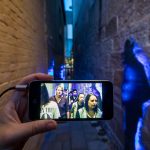 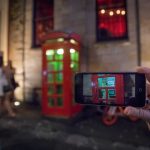 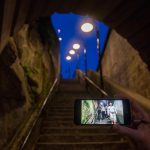 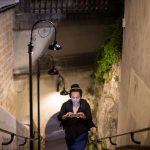 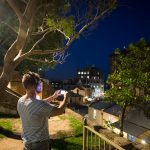 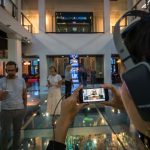 To experience this work as the artists intended, we recommend you start this walk inside Customs House after sunset, using quality headphones. To provide feedback on your experience, please email publicart@cityofsydney.nsw.gov.au

To use the City of Forking Paths audio walk, you agree to the following terms:

By downloading these files, you accept the terms and conditions above.

Immerse yourself in the engrossing world of fact and fiction as artists Janet Cardiff and George Bures Miller lead you on a twilight video walk around The Rocks.

Experienced on a smart phone or mobile device, The City of Forking Paths leads people on a fictional journey through physical surrounds at dusk. Starting at Customs House in Circular Quay, the work weaves a trail through The Rocks.

Against the backdrop of real streets, the artists invent fictional scenarios and incidents for users to discover along the way. Guided by the voice of Janet Cardiff, familiar streets, made mystical at dusk, become the backdrop for an unfolding narrative of memory, displacement and desire.

The title is an homage to Jorges Luis Borges’ story, The Garden of Forking Paths, a tale that uses the genre of a spy story to uncover questions of time and loss.

The City of Sydney commissioned one major artwork from each of the 2014, 2016 and 2018 Biennale of Sydney exhibitions.

The City of Forking Paths was commissioned by the 19th Biennale of Sydney: You Imagine What You Desire, curated by Julianna Engberg.

This is the first City of Sydney legacy artwork that will remain in Sydney as a permanent legacy.