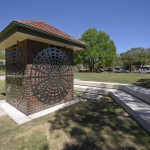 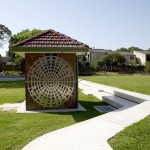 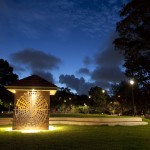 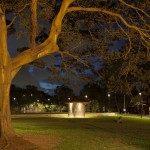 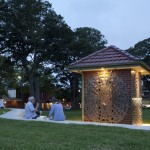 The approach is to embrace the unique function of the structure, and to re-purpose the building to once again become a sonically active feature of the park. The creative treatment of the Wireless House would however bring both the physical structure and its audio capacity firmly into the contemporary.

Sound artist Nigel Helyer and his team from Sonic Objects; Sonic Architectur’ have breathed life back into the historic Wireless House, located in Glebe’s Foley Park. Wireless House was a unique place for the community to enjoy listening to daily radio programs from 1934 until the early fifties. Nigel Helyer’s concept reconnects the sonic history of the Wireless House, with oral histories from the community.

Wireless House is located in Foley park at the intersection of Glebe Point Road and Pyrmont Bridge Road. The small brick building was built in 1934 to provide radio broadcasts for the local community. A wireless set was donated at the time by a department store, to be operated in the Wireless House so that local people who could not afford to buy radios might sit in the park and listen to the programs of the period.

The project ‘re-sounds’, or adds sound back into the structure, creating a contemporary version of its original social function. The Wireless House automatically detects visitors on approach and randomly selects audio sequences from a large database of archival and community oral history material, broadcasting them at a modest level for listeners nearby.

In a literal play on the word ‘Wireless’ the site is also the City of Sydney’s first outdoor internet hotspot, providing free internet access to visitors to the park. Visitors are taken to a website which features Glebe history, oral histories and archival sound materials.

Web shaped, laser cut aluminium grills have been inserted on all 4 exterior sides of the building, in a visual reference to its updated function. Each grill has been designed with a different pattern, modelled on the radiation patterns of Radio Antennae. The grills provide a view of the underlying structure and interior, refurbished with the extant radio stand and period crystal equipment.

Wireless House was launched with the opening of Foley Park on 26 September, 2009. A partnership with the National Film and Sound Archive as well as a significant oral history program run by members of the Glebe community, called Glebebytes, was also established to make it a project which will be part of the social fabric of Glebe for years to come.

Dr Nigel Helyer (a.k.a. DrSonique) is an independent Anglo-Australian sculptor and sound-artist. He is the director of a small multi-disciplinary team “Sonic Objects; Sonic Architecture” with an international reputation for large scale sound-sculpture installations, environmental public art-works, museum inter-actives and new media projects.