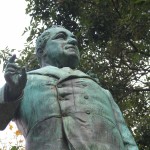 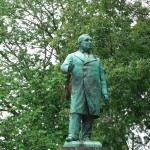 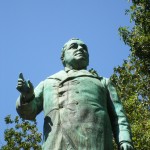 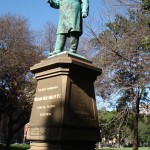 The William Bede Dalley memorial was installed in 1898 in Hyde Park North where it stands today. Funds were raised ten years earlier by general public subscription, after Dalley’s death on 22 October 1888. The bronze sculpture of Dalley stands well above eye-level on a polished granite pedestal, supported on a tiered stone base.

It is a life-size representation of the ardent nationalist, complete with a buttoned-up frock coat, which he wore habitually. Located in the northeast corner of Hyde Park, it is fittingly positioned overlooking the Law Courts and parliamentary buildings on Macquarie Street.

Born in Sydney from convict stock, Dalley was a respected political figure and nationalist who exerted wide-ranging influence throughout his life. He was mourned and eulogised in editorials and obituaries throughout the colonies.

Sculpted by James White, a Scotsman who had arrived in Australia in 1888, the statue is thought to be the first use in Australia of the ‘lost wax’ process of bronze casting, an old method which had been used for the famous bronzes of the Renaissance in France and Italy. The casting was carried out at White’s own small foundry in Petersham.

Although the statue was not ranked among White’s finest creations some laid the blame for this on Dalley’s short, stout physique. The pedestal for the sculpture seems in sympathy with Dalley’s frame, being somewhat squat in form. The Dalley statue is notable for its realistic qualities, as opposed to the idealised and romantic nature of most contemporaneous and nearby works.

In October 1888, soon after Dalley’s death, his friend and colleague, Sir John Robertson, organised a series of public meetings to erect a memorial in his honour and to set up a fund to achieve this.

The Committee of the ‘National Memorial to the Right Honourable William Bede Dalley’, which evolved from these actions, included the Lieutenant Governor, Sir Alfred Stephen; the Chief Justice, Sir Fredrick Darley; numerous prominent representatives of Parliamentary, judicial, legal, educational, church and business groups; and a range of other well-known Sydney identities of the time.

These meetings also brought together representatives of the Catholic, Protestant and Non-Conformist churches. Despite enthusiasm in the early years the Committee’s work lagged behind its intentions and it was not until 1898 that Dalley’s memorial was finally erected in Hyde Park North, where it stands today.

On the western side: ERECTED/ BY/ PUBLIC/ SUBSCRIPTION.

BORN IN THIS CITY,