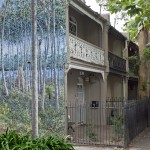 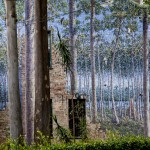 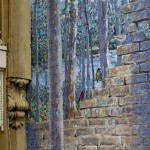 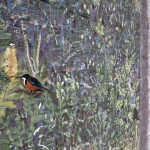 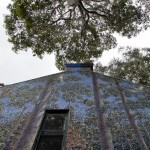 It was a lovely experience to re-live because it remains one of my favourites and was the first inspiring community art mural I ever did. It taught me the importance of including local people to create something meaningful. It was great to go back there and have the opportunity to redo it – it felt like I was re-affirming my wedding vows!

This mural painted by Peter Day and members of the community depicts a bush scene with Australian flora and fauna. The names of the flora and fauna are written along the base of the mural. The mural has a predominantly blue background with green bush land. Day was appointed Artist-in-Residence in Surry Hills in 1981 through a grant from the NSW Premiers Department.

The basic concept of the work was to camouflage the existing white wall to make it merge with the surrounding trees, grass and sky. Painting commenced 3 January, 1981 and, as the work progressed, local residents were surprised when they saw a section of Nickson Street disappear into native bush land and a series of colourful birds and animals appear.

The mural was repainted in 2012 by Peter Day and members of the local community, some of whom had been involved in the creation of the original work. In total the mural includes almost 40 species of birds, four dogs, a cat and some local residents.

Urban ecology and the artwork

Peter worked with the City of Sydney’s urban ecology manager to include additional indigenous birds in the new design, add new tiny laser-cut steel birds and integrate three windows, which have been installed in the terrace since the artwork was first painted.

New species added to the design include the black cockatoo and the pale rosella.

While some of the larger species, such as the rainbow lorikeet, are very common in Surry Hills and the city, smaller species such as the silvereye and spotted pardalote have declined.

The City of Sydney’s urban ecology strategy aims to identify and restore habitats and encourage the less common species, so that hopefully they will once more become abundant throughout the city.