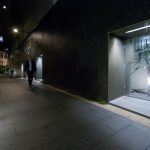 The translation of tree to paint to digital image to laser etch reflects a long journey laden with social and political history. Watling’s drawing was of a tree that existed pre-colonisation. In these artworks, the tree is conceptually back in situ.

Watling Tree is a series of etched steel panels attached to six sets of double fire doors, set within alcoves along Albion Place in Sydney’s CBD.

The panels are based on the iconic tree depicted in Thomas Watling’s drawings of the area from the late 1700s. Artist Caroline Rothwell says:

The tree imagery relates directly to the history of the site and is heavily influenced by the tree used in Thomas Watling’s drawing of the vicinity in the late 1700s. Watling’s tree was translated again and again by his admirers in pictorial renditions of the area. I like the idea of this influence continuing – where the representation of an actual specimen in the 1700s is reinstalled in a contemporary configuration in the 21st Century.

The trees are placed in a rotating sequence, beginning with an upside-down tree at the lower, Kent St end of the laneway and ending with an upright image at the George St end. The changing position of the images gives the deliberate impression of an animated sequence (acknowledging the artwork’s location behind a cinema) and is designed to echo the movement of passers-by up the slope of Albion Place.

The images stretch across the full width of each set of doors, disguising their function, and at night the etchings are illuminated by strip lighting set into the roof of each alcove. While the panels work together as a cohesive sequence, each is also designed to operate as an individual artwork.

The artwork was commissioned as part of the upgrade to Albion Place in 2012.

Caroline Rothwell is a highly experienced artist who studied in London, Auckland and New York.

Rothwell has held residences at several universities, studios and museums, including the Museum of Archaeology and Anthropology in Cambridge, UK.

She has displayed her work in solo and group exhibitions in cities across Europe, Asia, USA and Australia, and features in public and private collections throughout the world.