Wallamullah Land of Plenty by Michiel Dolk and Merilyn Fairskye 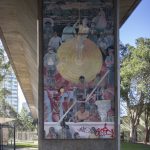 Wallamullah Land of Plenty is one of eight murals painted on the railway pylons at Woolloomooloo, celebrating the history and people of this suburb.

It shares the story of the Gadigal people, Woolloomooloo’s traditional owners, and the devastating impact of European settlers on their way of life.

The overall design is based on the Aboriginal land rights flag – black at the top, to represent the colour of the people, a yellow circle at the centre for the Australian sun, and red at the bottom for the land.

The mural depicts a time of unspoiled landscape, when the Gadigal people hunted, fished and foraged, and ‘Wallamullah’ was an important ceremonial gathering place.

Further down the mural the artwork illustrates this traditional lifestyle being stripped away. At first the Gadigal people lived alongside the settlers, but as time passed the newcomers built on their sacred lands and imposed their own customs and way of life.

It was more than 150 years before the Gadigal people of Woolloomooloo, and other Aboriginal peoples across Australia, began to reclaim their traditional homes. In the lower section of their mural, Dolk and Fairskye capture the determination of the people who fought to win back those rights and rebuild their communities.

Painted using details from historical records, newspapers, paintings, photographs and the personal memories of the local community, Wallamullah Land of Plenty acknowledges the sorrow and suffering of the Gadigal people, and their rightful place at the heart of Woolloomooloo’s community.