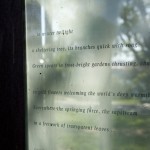 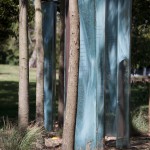 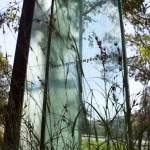 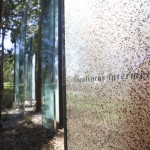 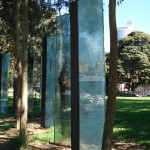 Trees were their thoughts:

that spoke in the language of leaves.

A one hundred metre curvilinear passage of new red-gums, native grass plantings, and glass panels runs along the central spine of the Lawson site in the Domain. Veil of Trees, by Janet Laurence and Jisuk Han, refers to an original stand of red gums felled during early European settlement. The installation reflects on the botanical history of the Domain and at the same time rejuvenates the site with species indigenous to the area.

Memory is embodied within the glass and steel panels. Some are inscribed with excerpts of texts and poetry by Australian authors, selected for their evocation of the nature of the bush. Others contain traces of ash, honey, resin, minerals and seeds of indigenous trees; organic material representing the botanical history of the Domain.

With the play of light on the translucent glass, a passage of reflection is created, a space where memory is gathered. LED lights in the panels illuminate the passage at night creating a poetic and fluid environment that reflects both the architectural and the natural surroundings.

Amidst the glass, a ribbon of Red Forest gums (Eucalyptus tereticornis) have been planted, each tree grown from the seed of the gums which existed there prior to European settlement. Along with native grasses, these trees regenerate the area with species once found there.

Janet Laurence is a Sydney based artist who works in mixed media and installation.

Exploring notions of art, science, imagination, memory, and loss, Janet Laurence’s practice examines the interconnection of life forms and ecologies. Her work addresses our relationship to nature through both site-specific and gallery works.

Jisuk Han has worked in the area of interpretive design, art and architecture for more than twenty years and has collaborated with artists, architects, curators and museums throughout Australia. Since her first collaborative artwork with Janet Laurence in 1996, she has completed numerous site-specific interpretive artwork projects with many artists in a varying role as artist, designer and/or production manager.

Veil of Trees / Janet Laurence & Jisuk Han / The creation of a passage of reflection, a space where memory is gathered. / Memory is embodied within each glass panel – traces of minerals, ash and seeds of indigenous trees are enclosed together with excerpts of Australian poetry and texts selected for their evocation of the nature of trees. / Amidst the translucent glass panels a ribbon of one hundred Red Forest gums – eucalyptus tereticornis – which once forested this site have been planted, each tree grown from the seed of the original Red Forest gums which existed prior to European settlement. Weaving either side of the ribbon of forest and panels clumps of native grasses define the linearity of the passage, engaging the visitor into, along and through this site of regeneration. / Installed: June 1999

It’s trees I look for nowadays, / year after year / adding their rings. Recording / this month’s frost, that season’s / burning, the arrival / and departure of leave, birds, / mice, barefoot invaders, / the appplecore wars / in the kingdom of twigs. / …the tree / is dreaming our lives. / Its dust-thick shadow reaches / the road… / David Malouf / From Evergreen

Trees were their thoughts: / peppermint gum black-sally, / white tea-tree hung over creeks… / There is / there was / a country / that spoke in the language of leaves. / Judith Wright / From Falls Country

There are five different Scribbly Gums, like five / brothers in mythology, each bearing a significant / name: sclerophylla, signata, rossii, racemosa / and see the red rim of its fruit – haemastoma. / Murray Bail / Eucalyptus

New trees step out of old: lemon and ochre / splitting out of grey everywhere, in the gum forest. / In there for miles, shade track and ironbark slope / depth casually beginning all around, at a little distance. / Sky sifting, and always a hint of smoke in the light; / you can never reach the heart of the gum forest. / Les Murray / From The Gum Forest