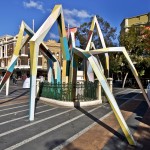 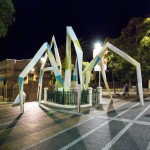 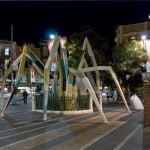 This work is a response to the mysteriousness of the shape of the space enclosed by the entrance fence and the two descending staircases. It is the mystery of the void inverted, the spider exiting its funnel.

Underworld presented a series of colourful large scale arachnid legs emerging from the disused underground men’s convenience. It called to mind a giant bright spider crawling out from an underground tunnel. This installation responded to the broader city space by injecting vibrant high key colour into the usual brown and grey site, and dynamically opposing the city grid with the large diagonal shapes on its faceted surface.

The green glow gave the artwork a theatrical atmosphere, and also celebrated the communities close to the site as a symbol of the night club culture.

The artwork’s design and symbolic form was a direct response to the existing architecture of the site, exploring the mystery surrounding the void made by the staircase. In contrast to the famous Louise Bourgeois Maman, a giant public artwork of a black spider, this work by Dale Miles in brightly coloured hues takes its inspiration from the local ecology and urban environment.

The artist drew on not only the past and present urban environment, but also gave voice to a now lost habitat, represented in the work by the form of the Sydney Funnel Web Spider exiting its funnel.

Dale Miles is a Sydney-based sculptor working with a diverse variety of materials. Since 2003, Dale has created work that questions the value of human progress and its effect on ecology.

The second Taylor Square project was Underworld by Dale Miles.