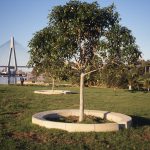 The sculpture tries to establish an intimate connection between the lifetimes of the people who use the park and the growth of these wonderful trees. Eventually the fig trees will create ruins of these perfect circles, with their toppled dates making memories of the community’s and the trees’ shared past.

Time Rings is an environmentally interactive sculpture at the western end of Bicentennial Park in Rozelle Bay.

The artwork comprises a series of rings, formed from precast concrete with inscribed lettering, circling the base of eight fig trees that line the path to the centre of the park. The rings are set into the ground and are designed to be shifted and dislodged by the buttressing roots as the fig trees grow.

Each of the rings represents a decade, starting with the 1990s when the trees were planted, and ending with the 2060s when they will be fully mature.

The ring representing the 1990s is the smallest and begins the installation. An additional stone has been placed in each ring in sequence, increasing the diameter to symbolise the passing of time and the growth of the trees from decade to decade.

The individual stones within each ring are inscribed with dates within the decade it represents. The dates were chosen using a random selection of birthdays from the children of nearby Annandale Public School, forging a powerful connection between the artwork and the local community.

Placed at ground level the artwork is fully accessible. Users of the park are encouraged to sit on the stones, read the dates and perhaps recognise their own birthdays. Time Rings is intended to inspire reflection on the past and wonder about the future, and to establish an intimate connection between the growing trees and the lifetimes of park users.

The artwork was commissioned by Leichhardt Council as part of the creation of Bicentennial Park.

Jennifer Turpin and Michaelie Crawford are award-winning artists whose work focuses on the design and production of site-specific kinetic artworks in the public domain.

Their practice is based in Sydney, where they have more than 18 years’ experience at the interface of art, science, nature and the built environment.