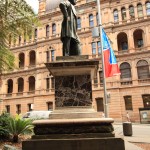 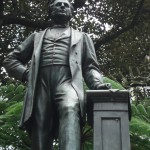 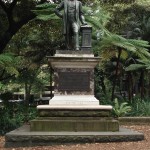 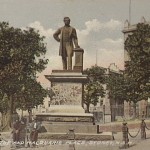 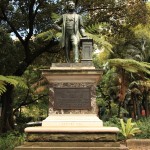 The Thomas Sutcliff Mort statue was erected in 1883, in memory of the man who was regarded as a pioneer of Australian resources and industries. It depicts Mort wearing a knee length coat with his right arm on his hip and left hand resting on papers on top of a pedestal.

The bronze statue stands in the south-western corner of Macquarie Place Park in Bridge Street, on the site of one of Sydney’s first fountains. It is part of a series of monuments celebrating 19th century liberal individualism, and was unveiled by the Governor Lord Augustus Loftus on Saturday 9 June 1883. It faces the Royal Exchange, which was the largest wool selling centre in the world.

Thomas Sutcliffe Mort (1816-1878) was born in Bolton, Lancashire, England. He arrived in Sydney in February 1838 on the ship Superb and became a clerk with the Aspinall, Browne & Co where he gained extensive experience in local and international commerce.

He was a pioneer of pastoral and livestock auctioneering with particular emphasis on the wool industry and was influential in establishing both international wool markets for Australia and setting the pattern for the later wool-broking firms. He also laid the foundations of the meat export industry in making exports of perishable food possible through refrigeration.

In addition, he was the founder of the Australian Mutual Provident Society, a promoter of the sugar industry in Queensland and a director of the Sydney Railway Company in 1851. Mort was also involved in mining and opened a large dry dock in Sydney in 1855. He was a prominent Anglican layman with substantial personal wealth.

American born sculptor, Pierce Francis Connelly (1841-1932), was raised in England but spent most of his life in Europe. He visited New Zealand in 1877-8 but was living back in Florence at the time of producing this commission. Connelly worked in the Neo-Classical style, and this statue was described in 1923 as ‘a good specimen of the sculptor’s art in spite of the trousers’.

The Mort Memorial Committee was responsible for commissioning and erecting the statue and first met in October 1882 to discuss the project. The committee worked in co-operation with the City of Sydney to erect the statue, with funds supplied by Mort’s Dock Company, other businesses and some public subscriptions.

The inscription added in 1925 on the front plaque (south-western face) reads: Thomas Sutcliffe Mort/ born: England 1816./ Arrived Australia1837./ died: Australia 1878./ A pioneer of Australian resources, a founder of Australian industries, one who established our wool market./ the first to make exports of perishable food possible by refrigeration/ and to provide docks for the reception of the world’s shipping./ a founder of the Australian Mutual Provident Society./ and foremost in every movement for the care and welfare of his/ fellow citizens, who in gratitude erected this monument to his memory.

the first to make exports of perishable food possible by refrigeration

and to provide docks for the reception of the world’s shipping.

a founder of the Australian Mutual Provident Society.

fellow citizens, who in gratitude erected this monument to his memory.