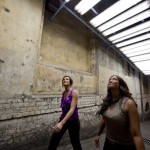 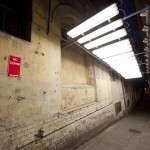 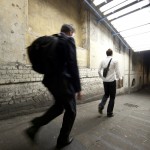 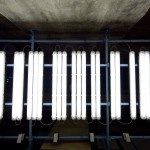 The laneway is converted from a place of movement and passage to a place of stasis and conversation about the city. It is re-contextualised and opened up to new uses and new interpretations.

Part way along Abercrombie Lane were installed the barcodes of two texts about the city. These ubiquitous, machine readable, representations of data were enlarged to a civic scale, with the idea that the public could quite literally occupy a kind of space between the two texts.

Three metres in the air, an enlarged diagram of the barcode of Jan Gehlʼs book Life Between Buildings was suspended in white fluorescent tubes, animated by the interaction of the public passing through the lane. This influential Danish Architect advocated improving the quality of urban life by re-orienting city design towards human scale, the pedestrian and the cyclist.

Beneath this suspended code on the ground plane, lay another bar code painted in black. This code was that of Two or Three things I know about her, a 1967 French Film by Jean-Luc Goddard that was both socially and stylistically radical.

The two codes sought to frame a space of dialogue on the city and create the opportunity for one to engage with it.