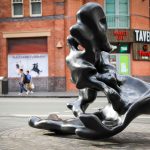 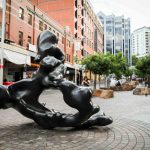 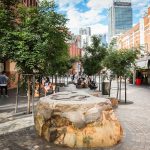 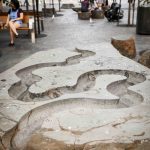 I love the history of this area and the idea [of maintaining] the integrity of the street life to make Thomas Street a magnet for pedestrians, not just in Sydney but throughout Australia. So the space we want to create will be one of harmony, activity and excitement.

In 2016, a section of Thomas Street in Sydney’s Chinatown was remodelled based on the theme of a ‘New Century Garden’ developed by curator Aaron Seeto. Initiated by the City of Sydney as an artist led project, the street upgrade incorporates a new pedestrian-friendly public space, with additional native Australian trees, lighting, seating and public art.

Following a public symposium on the project’s theme, led by Seeto in his role as Director of Gallery 4A, artist Lindy Lee was commissioned to create The Garden of Cloud and Stone. The artwork, based on Feng Shui principles, comprises a series of elements: ‘Scholars Rocks’, resembling naturally occurring rocks traditionally appreciated by Chinese scholars; a water feature and seating in natural stone; ‘Moongate,’ composed of ‘flung’ bronze components embedded in the paving at the intersection of Hay and Thomas Streets; and ‘Cloud Gate’, a series of circular shade sculptures hung, like floating clouds, above Thomas Street.

Suspended  from catenary cables stretching between the Market City building and a series of supporting columns on the opposite side of the street, the ‘Cloud Gate’ component consists of paired layers of domed, perforated white metal discs. The discs gently reflect light at night and filter sunlight during the day, casting circular patterns of shade onto the footpath and street below that vary with the time of day and the changing seasons.

In ancient Chinese philosophy water has great symbolic value due to its three states – solid, liquid and vapour. Clouds are significant because they embody change, transience and impermanence.”

Hill Thalis and Jane Irwin Landscape Architecture, who worked with Lee on the artwork and led the design of the overall street upgrade project, describe the street remodelling and the installation of The Cloud Gate as “an ambitious project to recognise the past and present cultural identity of Haymarket, through architecture, place design and public art, while maintaining the teeming, informal and open street life that makes Chinatown such a lively and cherished urban place.”

Lindy Lee is a Chinese-Australian artist who has exhibited extensively in Australia and internationally and has participated in numerous prestigious group exhibitions including the Australian Perspecta and the Sydney Biennale.

Lee is a founding member of Gallery 4A in Sydney’s Chinatown and a trustee of the Art Gallery of New South Wales.