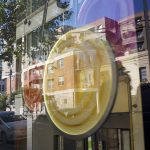 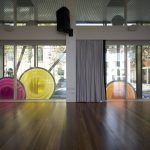 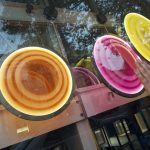 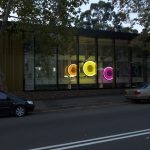 S(w)ing is an artwork activated by children. Paying homage to Heffron Hall and Albert Sloss Reserve as the site of one of Darlinghurst’s first community playgrounds, S(w)ing activates the ‘urban window’ with an interactive and kinetic artwork. The narrow building-wide void space is transformed by the performing artwork into a ‘street theatre’ where the ‘strings’ are pulled by children playing in the space below.

S(w)ing is a playful kinetic sculpture consisting of three large, pendulum discs of coloured acrylic in pink, orange and yellow. Each disc is illuminated from within by three concentric circular neon lights.

The discs are suspended on metal poles from the ceiling of the East Sydney Community and Arts Centre, behind the five-metre high glass ‘urban window’ on its Burton Street façade.

The discs are highly visible from the street and through the viewing window on the first floor of the community centre, where viewers find themselves on the same level as the swinging discs. As they swing in staggered, intersecting arcs, the discs throw bright neon light out onto the street.

S(w)ing is an interactive artwork that is popular with both children and adults. Hirers of the lower ground level of the community centre are invited to engage with it in physical play. Coloured ropes connected to pulleys activate the pendulum discs. These can be accessed from beneath the artwork, on the ground floor of the community centre.

As people pull or swing on the ropes the discs are set into gentle or energetic gliding motion, like the ringing of church bells.

The varied movement of the discs mixes vivid colour in illuminated, overlapping patterns that are reminiscent of the intersecting patterns seen on the surface of water.

Jennifer Turpin and Michaelie Crawford are award-winning artists whose work focuses on the design and production of site-specific kinetic artworks in the public domain.

Their practice is based in Sydney, where they have more than 18 years’ experience at the interface of art, science, nature and the built environment.

Located in a heritage conservation area on the corner of Burton and Palmer streets, the 2017 refurbishment of the 1966 building retained the heritage features of the original Heffron Hall.