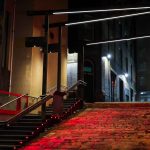 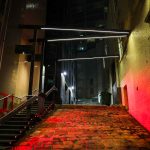 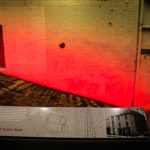 The Spanish Quarter steps are nestled in a narrow laneway between Sussex St and Douglass St, Sydney.

This public stairway is built alongside a steep, heritage-listed sandstone embankment, making the laneway far more accessible without obscuring the street’s historic character. The modern metal steps form a sharp contrast with the worn sandstone of the original embankment, highlighting the difference between the laneway’s new and existing features.

Before the installation of the steps, the embankment was almost inaccessible. The stairway helps to form new connections between the people who live, work and spend time in the area.

Above the steps, artist Peter McGregor has created a framework of metal beams and suspended lights that cast both light and shade, echoing the contrasts that are a characteristic feature of the area.

Sydney’s small Spanish Quarter was located alongside its bustling Chinatown, and these steps and lighting were installed as part of the upgrade of  Chinatown and the Spanish Quarter before the Olympic games in 2000.

The stairs highlight the fact that the cobblestones on the embankment have been laid to accommodate the irregular alignment of the larger streets on either side of the block.

Peter McGregor has studied both art and architecture and continues to practice the fine line and at times large void between both, in a range of projects, including new parks and squares, street and lane upgrades, small public buildings, as well as apartment buildings and houses.