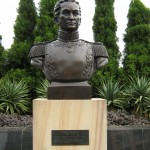 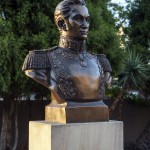 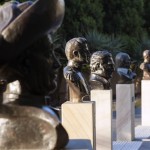 The bust of Latin American liberator, Simon Bolivar, is carved in alabaster and stands approximately 20 centimentres high. It is placed on top of a sandstone base of approximately 1.5 metres by 0.5 metres wide. It is one of a series of busts in Plaza Iberoamericana on Chalmers Street commemorating the contribution of Spanish and Portuguese speaking people to the history of Australia.

Libertor and hero Simon Bolivar was born on 24 July 1783 in Caracas, Venezuela. His parents belonged to the aristocratic upper class in South America, the ‘Criollos’, a social class of the Hispanic Colonial Empire. In 1799, he was sent to Madrid to complete his education under the instruction of an uncle. In 1802, at the age of 18 he married Maria Teresa del Torro Alaiza. The marriage was short lived as Maria died in Caracas six months later.

Bolivar returned to Europe in 1804 and the following year in Rome he made his famous oath to liberate America from the Spanish Empire. In 1813 an army organised by Bolivar routed the Spanish and liberated Venezuela. He was appointed President but was forced to flee following internal political conflicts. He took refuge in Jamaica where he wrote his celebrated manifesto La Carta de Jamaica (Letter from Jamaica).

In 1821 at the battle of Carabobo he was again involved in liberating Venezuela from Spanish occupation. He died on 17 December 1830 near the city of Santa Marta in Colombia. His name has grown to mythical proportions but he is well remembered for being the founder of the Gran Colombia (The Great Colombia), which comprised Colombia, Ecuador and Venezuela.

The bust is the work of Ecuadorian sculptor Cesar Quizhpe.

The bust of Simon Bolivar forms part of the Plaza Iberoamericana, on Chalmers Street near Central Station. It was presented to the Australian people as a gift from the Republic of Venezuela on 27 September 1988 after being brought to Australia by the Ambassador of Venezuela. It was unveiled on 4 February 1989 as one of the four initial monuments in the Plaza.

A plaque on the sandstone plinth reads: “Simon Bolivar / (1783-1830) / This great thinker and statesman of Latin America was / born in Caracas. / Bolivar is remembered as the founder of La Gran / Colombia (The Great Colombia: Ecuador, Colombia & / Venezuela) and liberator of Bolivia, Colombia, / Ecuador, Peru and Venezuela.”