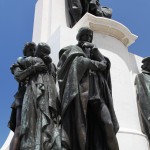 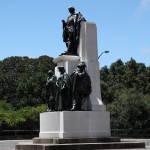 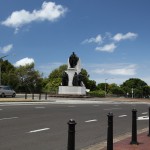 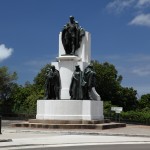 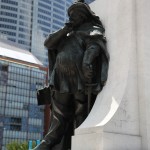 This bronze memorial statue features a life-sized figure of William Shakespeare, who stands with pen in hand at the apex of a supporting marble pedestal. He is surrounded by a selection of characters: Romeo and Juliet, Othello, Portia and Falstaff.

It was unveiled in 1926 and an article in the Sydney Morning Herald describes it ‘in the circular sweep between the Garden Palace Grounds and the Mitchell Library, at the hilltop where the long Figtree avenue descends to Woolloomooloo…’ However in 1959, the memorial was repositioned in Shakespeare Place opposite the State Library to make way for the Cahill Expressway. When initially erected Shakespeare faced east, towards the ridge above Woolloomooloo however, in 1959, it was turned to face west, looking toward the city.

Commissioned in the pre-war fervour for ‘Empire’, Shakespeare’s role as a man of ‘greatness’ was consolidated.. Henry Gullet, President of the Shakespeare Society of New South Wales from 1904 to 1911 and key influencer in the project, regarded ‘Shakespeare as not only the typical man of letters, but also, and even more, the typical Englishman. In that serene and somewhat enigmatic personage he saw enshrined humour, tolerance, wider understanding of human nature, soundness of mind and body, and equal development of all his faculties that belong to the English race in all its exemplars.’

Sculptor Sir Edgar Bertram Mackennal (1863-1931) was the most successful Australian artist of his time, and is still arguably the best known of Australia’s sculptors. Born in Melbourne, he studied at the National Gallery School and Victorian Academy, and in 1883 at the Royal Academy and British Museum in London.

However, negotiations were halted abruptly when Gullett died of heart failure in August 1914. Endeavouring to realise their father’s objective, the women of Gullett family maintained contact with Mackennal, who continued to work on the statue despite the War and numerous other commissions.

The marble pediment, after being cut and polished in Italy, was shipped to Sydney c.1924 and was placed in storage. The five bronze figures, which were cast in England, arrived soon after.

On the base of the main block, a quote from The Tempest (Act IV, Scene 1) by William Shakespeare is inscribed: OUR REVELS NOW ARE ENDED, THESE OUR ACTORS, / AS I FORETOLD YOU, WERE ALL SPIRITS, AND / ARE MELTED INTO AIR, INTO THIN AIR: / AND, LIKE THE BASESLESS FABRIC OF THIS VISION, / THE CLOUD-CAPP’D TOWERS, THE GORGEOUS PALACES, / THE SOLEMN TEMPLES, THE GREAT GLOBE ITSELF, / YEA, ALL WHICH IT INHERIT, SHALL DISSOLVE, / AND LIKE THIS INSUBSTANTIAL PAGEANT FADED, / LEAVE NOT A RACK BEHIND. WE ARE SUCH STUFF / AS DREAMS ARE MADE ON: AND OUR LITTLE LIFE / IS ROUNDED WITH A SLEEP.

OUR REVELS NOW ARE ENDED,

AS I FORETOLD YOU,

WERE ALL SPIRITS, AND

ARE MELTED INTO AIR, INTO THIN AIR:

FABRIC OF THIS VISION,

THE GREAT GLOBE ITSELF,

YEA, ALL WHICH IT INHERIT,

LEAVE NOT A RACK BEHIND.

WE ARE SUCH STUFF

AS DREAMS ARE MADE ON:

AND OUR LITTLE LIFE

IS ROUNDED WITH A SLEEP.