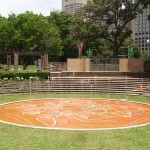 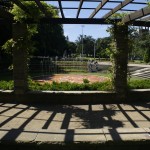 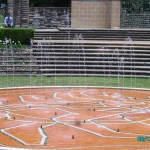 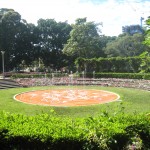 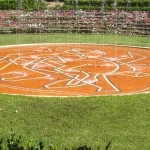 Decorative bronze patterned memorial gates set between curved sandstone walls that surround tiered circular gardens. The gardens are positioned around a central fountain with a shallow pool with mosaic inlay.

The memorial gates, garden and fountain were a joint project of Sydney sculptor Lyndon Raymond Dadswell and architect, Henry Epstein, whom little is known about.

Dadswell was born in Stanmore, NSW in 1908 and studied at the Julian Ashton Art School (1923-1924) and at East Sydney Technical College (1926-1929) under Raynor Hoff. Later he studied at the Royal Academy School in London and travelled and studied in Munich and Florence. A highlight of his early career was the winning of a commission for a series of twelve sandstone relief panels for Melbourne’s Shrine of Remembrance.

In 1934 he was awarded the Wynne Prize which, at that time, had been given to a sculptor only on two previous occasions. After returning to Australia in 1937 to teach at the National Art School, Dadswell enlisted during the Second World War and served in the Middle East (1941-1942), before becoming Official War Artist (1942-1943). At the end of the war he returned to teaching at the National Art School.

In earlier years a band rotunda stood on the site of the King George V and VI Memorial Gates and Sandringham Garden Fountain. This was removed at an unknown date and a sunken garden was installed as a temporary development. In September 1951, with a Royal visit expected during the following year, a decision was made to redevelop the site as a memorial garden to commemorate this visit.

On the sudden death of King George VI in 1952 and the cancellation of the Royal Tour, the plans were slightly amended. The garden was renamed Sandringham Garden in remembrance of the late King and a tablet was erected summarising the King’s long association with Sandringham House, England.

At the end of 1952, the New South Wales Cabinet decided to erect a joint memorial to King George V and King George VI with Sandringham Garden suggested as an appropriate site. A King George VI Memorial Fund, open to public subscription, was launched for the purpose. Lyndon Dadswell, sculptor, and Dr. H. Epstein, architect, were asked to design and construct the combined memorial. The Sydney City Council subsequently endorsed this proposal.

Plans for the new memorial were announced in April 1953. They included metal memorial gates incorporating the crests and heraldic motifs of each king; a memorial tablet with inscription and dedication, featuring ornamental heraldic motifs of flora and fauna of New South Wales; and a memorial fountain with mosaic inlay.

The incorporation of these features into the existing garden involved considerable reconstruction work. Part of an existing pergola was removed to accommodate the memorial gates and the reflection pool was transformed into the mosaic fountain. The Sandringham Memorial Gates were unlocked by Queen Elizabeth II on 5 February 1954.

On the south side, it reads: “This memorial was opened on the 5th February, 1954, / by her Majesty / Queen Elizabeth the Second / During the visit to N.S.W. / of her Majesty and / His Royal Highness / The Duke of Edinburgh”.

Erected as a tribute from The people of New South Wales

to the memory of

This memorial was opened on the 5th February, 1954,

During the visit to N.S.W.

of her Majesty and

The Duke of Edinburgh.