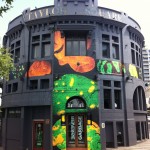 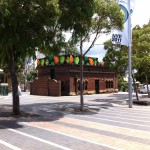 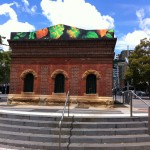 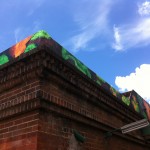 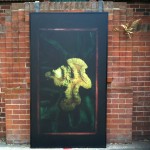 Imagine global co-operation for a global problem. Imagine corals as a barometer of climate change. Imagine we are the pivot point. Imagine rekindling Venus.

Rekindling Venus: in plain sight was an installation that used new technology to reach out, across Taylor Square, and connect the community with the natural environment. This artwork brought together technological advances and ancient understanding, new media and old practices, electronics and the electricity of the human touch to interact and engage with the world’s ocean areas.

The installation consisted of seven interactive posters at Taylor Square and a glowing lightbox at Customs House, Circular Quay. The set of extraordinary images of coral specimens would trigger a free mobile phone application, connecting viewers to a virtual reef.

The app would register the poster the user was standing at to activate a 3D portal to coral reefs, receive real-time alerts about coral bleaching worldwide, and link to a website with more information on warming sea temperatures.

This work was part of a collective installation group called Rekindling Venus. It was developed by the artist as a companion piece to Coral rekindling: Venus, an immersive film giving a kaleidoscopic journey through the fluorescent coral metropolises of Australia, Papua New Guinea and Indonesia. The film was launched to coincide with the Transit of Venus in June 2012.

The title of the works was inspired by the ancient wonder of the cycle of Venus, and by the international cooperative effort of astronomers in the 18th Century to witness the transit, journeying to sites across the globe in order to measure the size of the solar system.

The project was, according to Wallworth, a metaphor for the worldwide cooperation that is needed to address “the most urgent scientific challenge of our time – climate change”.

Lynette Wallworth is a renowned Australian artist whose immersive video installations reflect on the connections between people and the natural world. Her work uses photography, film and interactive technologies, like touch-based interfaces, to engage viewers and allow them to experience her works intuitively.

Often working in series or mediations on one theme, her measured pace suggests that patient observation might lead to richer understanding between ourselves and the natural environment.

The artist collaborated with coral fluorescence specialist Anya Salih, a scientist at the University of Western Sydney, to develop the work. The data was supplied by the United States’ National Oceanic Atmospheric Administration and was updated regularly.