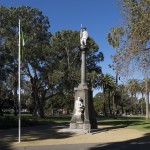 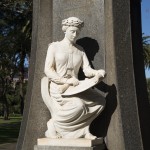 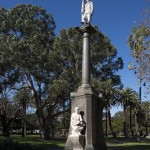 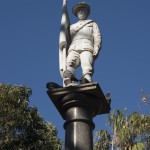 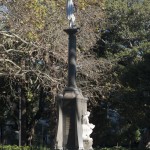 This WW1 memorial consists of a two-stepped stone base with a stepped tapering pedestal and two figures carved from marble. A female figure is sitting on one side of the pedestal and a soldier is standing on a granite column that was restored after being damaged in a storm in 1975. The tapering pedestal consists of a central shaft with shaped wings joined at each corner. The female figure is seated holding a scroll in one of the niches created by the tapering pedestal. The other niches contain inscriptions in gold, listing the names of local men who served in the First World War. The column toppled over during a storm and spent many decades in storage, until it was reinstated during conservation in 2008.