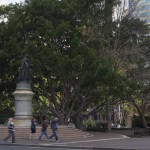 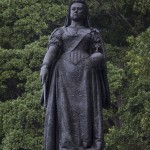 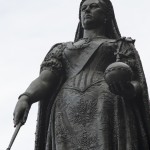 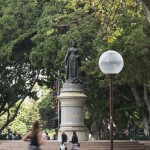 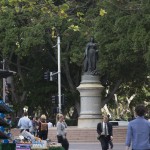 Standing on a column shaped pedestal of Moruya Granite, this bronze statue of Queen Victoria was first unveiled during the opening celebration for Sydney’s International Exhibition in 1879.

Victoria is wearing a long gown with a tight fitting bodice and a scope neckline. In her left hand she is holding an orb and in her right hand she holds a sceptre which points downwards. The statue portrays a larger than life, idealised image of the Queen.

The Queen Victoria statue was the work of Joseph Edgar Boehm (1834-1890). Born in Vienna, Boehm settled in England where he executed a colossal statue of Queen Victoria at Windsor, of which the Sydney statue is a copy. He was patronised by the Royal family and buried in St. Paul’s Cathedral on Queen Victoria’s desire.

After its initial launch in 1879, the Queen Victoria monument was to be unveiled a further three times within a ten-year period.

The second unveiling, held in 1881 without the statue, was undertaken to take advantage of the presence of Princes Edward and George. While this ceremony was merely to lay the foundation stone, the day seems to have been treated as a major festival. A contingent of 15,000 to 20,000 school students was given a day’s holiday, and an estimated 80,000 people were there to witness the ‘great event’.

The foundation stone, it seems, stood forlorn until the third unveiling, which featured the statue on a new pedestal. Designed by James Barnett, Colonial Architect, the pedestal was stood ‘about twelve feet high, and the whole monument was to stand 22 feet high when eventually erected.

The 24th of January 1888 saw Sydney awash with celebrations for the centenary of British settlement, and the unveiling of the statue of Queen Victoria figured prominently in these activities.

In planning the refurbishment of Macquarie Street for the Bicentennial, Queen Victoria again shifted, this time to her current position outside St. James’ Church, facing down Macquarie Street towards the harbour.

The inscription on the eastern side of the pedestal reads: VICTORIA

A bronze plaque at the foot of the statue bears the following inscription: QUEEN’S SQUARE IN THE CENTENARY YEAR, 1888, TO THE CHEERS OF 50,000 ONLOOKERS, THE PULL OF A GOLDEN CORD REVEALED THIS BRONZE OF QUEEN VICTORIA/CHANCERY SQUARE, THUS BECAME QUEEN’S SQUARE, THIS PLAQUE WAS SPONSORED BY CALTEX, COMMEMORATING OUR HERITAGE, THE NEW SOUTH WALES GOVERNMENT.

QUEEN’S SQUARE IN THE CENTENARY YEAR