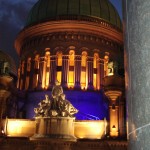 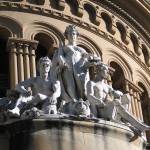 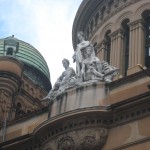 This is one of two statue groups by sculptor William P. Macintosh, which were commissioned in 1897 during the construction of the Queen Victoria Market Building.

Located on the east façade of the building’s central arches at the George frontage, this group features a lightly draped female figure flanked by two, semi-nude males. Made from Sicilian marble, the statues stand approximately 4.5 m high.

In his submission to Council in January 1897, Macintosh outlined his specifications for the allegorical group of statues:

Design No. 1…Standing upon a raised pedestal in centre is a lightly draped female figure Representing the controlling Powers or Guardian Genius of the city, with the sword and scales of “Justice” in one hand and the scroll of “wisdom” in the other. On her head is the Civic Crown and Waratah wreath, at her feet a shield bearing the City Crest….’

On her right hand is seated a semi-nude muscular male figure representing “Labour” as applied to the productive elements and to Industry with the appropriate symbols grouped around him. Vis-the wheat, ram, fruit, and beehive. On his head is a wreath of Olive – a symbol of peace…’

On the other side is a corresponding male figure also wreathed with Olive, and representing “Commerce” and ‘Exchange”, by his side a ship in full sail, in his left hand a bag of money and resting his right upon the ledgar book’.

It was claimed in a 1984 article in the Sydney Morning Herald that the male figures in this group were modelled on the body of Percy Cavill, one of Australia’s first swimming champions.

Macintosh was born in Scotland in 1857 and arrived in Sydney in 1880. He taught sculpture at East Sydney Technical College and from 1880-1882 studied at the Sydney Mechanic Schools of Arts, where he received the inaugural Students Prize in 1882. Macintosh was commissioned by the Parkes Government to provide carved sandstone pillars and sculptures for the Sydney Museum of Applied Arts and Sciences and the Lands Department Building.

The lavish Queen Victoria Building was conceived by wealthy businessmen Aldermen in the boom 1880s but was nonetheless to be built in the economically depressed 1890s by workmen on reduced wages. The plans for this graceful, though extravagant, public building included the provision of two groups of statues.

Designs were called for in 1896 and there was great deliberation regarding the nature of the sculptures in council in January 1897. Mayor Samuel Burdekin along with George McRae, the City Architect W. L. Vernon were appointed to choose two groups of statues from the many submitted, according to the 1898 edition of the Building, Engineering and Mining Journal (p.22). Macintosh’s proposal was chosen by Mayor Samuel Burdekin, George McRae and the City Architect W. L. Vernon from the many submissions.

The City of Sydneyl, however, chose to have the sculptures rough shaped in Italy in Sicilian marble and finished in position for a cost of 1,400 pounds. The marble was obtained from the workshop and studio of a Mr S. A. MacFarland of Carrara, Italy, though it is not known whether the marble was from Sicily.

McIntosh and ten assistants spent four months working on half-sized models of the two groups of statues, initially made of clay. Subsequently the models were formed in plaster of Paris and transported to Carrara, Italy, where the sculptor supervised the reproduction.

The grand opening of the Queen Victoria Market buildings was held in July 1898.

The sculptures were cleaned and restored in 1984, as part of the restoration and redevelopment of the Queen Victoria Building by the Malaysian Development Corporation Ipoh Garden Australia.