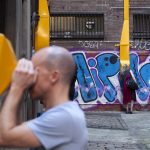 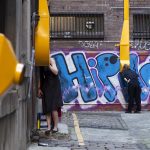 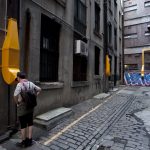 Skittle Lane, a forgotten space of the inner city, becomes the site for audiences to come closer to some of the most misunderstood and overlooked parts of our city – the suburbs on the western periphery.

Adding new, brightly painted, yellow sections of ducting, and attaching custom-built toppers and eye pieces, the artists created the illusion that viewers could peer into the periscopes’ windows at street level, and see out over the buildings to distant corners of Sydney’s western suburbs.

Within each of the eye pieces was a concealed screen that played a continuous loop of video works. The films on display were created by western Sydney video artists Fadia Abood, Vinh Nguyen, Saber Baluch and Zahra Alsamawi to showcase the diversity and beauty of their home suburbs.

The peri(pheral)scopes, peering out from the safety of the CBD, play on the way that the centre, when not completely ignoring the periphery, tends to view it only as an object of curiosity, exotic, an oddity, variously because of its cultural diversity, nefarious goings-on, urban sprawl and suburban un-sustainability. But is there more to these places than the mostly bleak, sometimes bizarre picture painted by the headlines? What is it like to live your life there, on the edge?

Hugo Moline trained as an architect and has worked on housing and public space projects for communities in Australia and Asia.

Heidi Axelsen studied as a sculptor and has worked across a range of mediums in Sydney and abroad. Together, Axelsen and Moline collaborate on projects in both galleries and public spaces. They were invited to participate in the Echigo Tsumari Art Triennale in 2015.

Adriano Pupilli is Lead Architect and Director of a Sydney-based architectural practice committed to innovative and sustainable architectural solutions.