The artist, Lara Schnitger in front of her artwork. 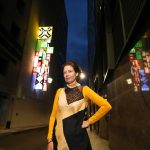 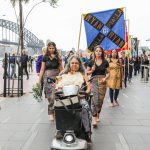 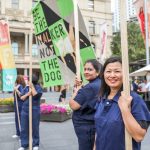 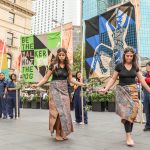 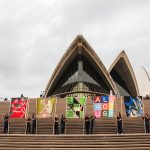 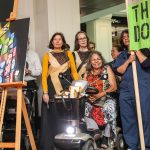 Like a quilt made of light, my art will suffuse Reiby Place with brilliant light, images and phrases of empowerment, making it safe to walk there.

Patchwork of Light is an array of 10 brightly coloured light boxes, positioned high up at the Pitt Street end of Reiby Place. Boldly emblazoned with figures and phrases in the Sydney Aboriginal language and English, the artwork brings our city’s Aboriginal, European, political and sporting histories to life.

While examining modern-day Sydney, Schnitger became inspired by a figure from Sydney’s past, Mary Reibey (1777–1855). Channelling Australia’s earliest suffragists and its first two female Olympians, the artist communicates a message of female empowerment that is uniquely Australian.

One light box charts four separate years significant in the advancement of women in Australian politics and civic life. In 1884, Henrietta Dugdale formed the first women’s suffrage society in the Australian colonies. In 1902, white women were granted enfranchisement to vote in federal elections. In 1962, Aboriginal people were finally granted the same right to vote. And in 2010, Julia Gillard became the first female prime minister of Australia.

Another light box depicts Olympic swimmers Fanny Durack and Mina Wylie on the podium with crossed bodies and arms to suggest unity and defiance. Public fundraising enabled these swimmers to travel to the Stockholm Olympics (1912 was the first time women’s swimming events were included) where they won gold and silver medals. With the figure of the Eora fisherwoman, Patchwork of Light reflects the shared experience between suffragists and Aboriginal women.

The artwork was developed with Wiradjuri/Yuin elder Aunty Bronwyn Penrith, whose journey has been dedicated to reclaiming the culture of and respect for Aboriginal women.

Too often Aboriginal women are projected as being inferior to male counterparts. Casting a different light on this myth, Eora fisherwomen were providers and traders.

Read the stories behind the ten Australian feminist icons featured on the light boxes.

Prior to the official launch of the artwork a procession event was led by the artist Lara Schnitger and Aunty Bronwyn Penrith departing from the south steps of Sydney Opera House following the harbour edge to the artwork location. Each member of the group carried feminist banner artworks created by Schnitger, as part her series Suffragette City.

Lara Schnitger was born in 1969 in Haarlem, The Netherlands. Based in Los Angeles, she has exhibited extensively in the US, UK and Europe. Since 2015, Schnitger’s ongoing performance project Suffragate City has introduced themes of feminism and protest. These have been performed as live processions in cities around the world.

The City Centre Public Art Plan launched in June 2013 is part of the City of Sydney’s $220 million contribution to the NSW Government’s light rail project.

This project has transformed the city with major public domain upgrades, including new infrastructure and the pedestrianisation of George Street.

New public art created under this plan is enhancing our city’s well-known features, highlighting important places and magnifying ideas that have shaped the city.

This plan, prepared by Curatorial Advisor Barbara Flynn, contributes to the legacy of permanent public art works in the City Art collection, supporting events and temporary works of art that bring a focus, distinction and richness to Sydney’s civic spaces.