Passing Through Customs by Michiel Dolk and Merilyn Fairskye 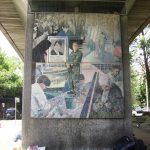 Passing Through Customs is one of eight murals painted on the railway pylons at Woolloomooloo, showing the history and people of this suburb.

This mural celebrates the wharves that were central to the life of this waterfront community, and the diversity of the people who lived and worked there – sailors, naval personnel, fishermen, factory workers and waterfront labourers of many nationalities.

By the early 20th century there was a growing fishing community in Woolloomooloo. Waterfront boarding houses were filled with single men from Italy and Malta, who manned the fishing fleet or worked on the wharves as stevedores, painters and dockers.

The suburb was originally home to Sydney’s fish markets, and even after the markets were moved in 1910, Woolloomooloo remained at the heart of the local fish trade. With the fishing fleet moored at Brown’s Wharf, to the west of the iconic finger wharf, fishermen were always a part of Woolloomooloo’s street life.

As the embarkation point for troops leaving for war, arrival point for migrants and returned servicemen, and from 1956 as the city’s passenger terminal, Woolloomooloo’s wharves have played an important part in Sydney’s history.

The top half of Passing Through Customs is devoted to the people who passed through these docks over the decades.

Passing Through Customs was painted using details drawn from historical records, newspapers, archives, photographs and the personal memories of the local community.