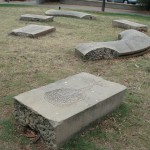 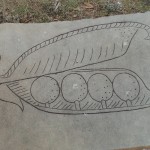 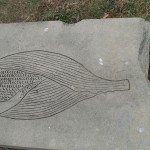 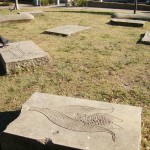 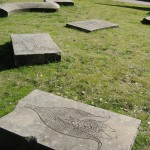 Outcrop Esculentus Spiralis features 12 pieces of sandstone, ranging from small rectangular blocks to larger curves of copping, lying partially embedded in the parks central elliptical lawn. Engraved in each block is a botanical drawing of a plant which has been eaten by the local community at some time over the past 200 years. The sculpture uses sandstone which was quarried on the Pyrmont Peninsula last century and was previously part of the Pyrmont Bridge.

The blocks radiate from a central peak to make an approximate circle 10 metres in diameter. The diet of local Indigenous groups and the settlement of English, European, Chinese, Mediterranean and South East Asian, are all reflected in the engravings including bracken root, banksia nectar, wheat, mint, ginger, grapes corn, peas, olives cabbage, mushroom and garlic. The variety of plants indicates how the community has evolved by observing the change in diet.

The title, Outcrop, Esculentus Spiralis holds layers of possible meanings. Initially the notion of an outcrop of rocks in a landscape is evident. Isolating the crop makes reference to the botanical drawings. Esculentus spiralis uses Latin botanical language, describing the work, instead of a plant, to be edible, and spiraling out.