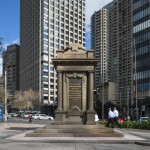 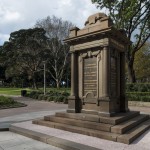 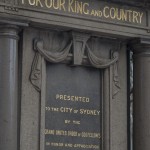 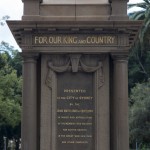 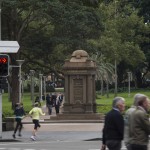 This memorial drinking fountain consists of a pink granite and sandstone monolith obelisk set on a stepped sandstone base. Approximately three metres high, it is located in the south-west corner of Hyde Park North, on the corner of Elizabeth and Park Streets.

The foundation was erected in memory of the members of the Oddfellows Society who enlisted in World War 1. The Oddfellows movement began in 18th century Britain as a social club, but was reorganised in 1810 into friendly societies, insurance and lending organisations, including Manchester Unity. In the 1930’s the Order boasted over 5,000 lodges, with over a million members worldwide.

The fountain was created by Samuel Lipson (1901–1995), who was born in Leeds to Lithuanian Jewish immigrants and studied architecture at the Glasgow School of Arts. He arrived in Sydney in 1925 and first worked in the office of Henry E. White, then the Commonwealth Department of Works.

Lipson was a partner in the Sydney architectural practice Lipson & Kaad, which became one of the most innovative and prominent in the period from the 1930s until the 1960s.

In 1919 the Grand United Order of Oddfellows submitted to the City of Sydney a design for a memorial drinking fountain to commemorate its members who enlisted for active service in World War I.

The estimated cost of the fountain was 1,000 pounds. At a meeting in May 1920, the City of Sydney considered and approved the suggested site near the steps at the top of Market Street in Hyde Park. This location, however, would have necessitated the removal of a gun, a bubble fountain and an electric light pole.

Combined with the proposed extensions to the city rail network, this influenced a subsequent decision in October 1920 to site the fountain on the corner of Elizabeth and Park Streets on the south-western corner of Hyde Park North.

An inscription facing the intersection of Park and Elizabeth Streets reads: 1921 / FOR OUR KING AND COUNTRY / PRESENTED TO THE CITY OF SYDNEY/ BY THE / GRAND UNITED ORDER OF ODDFELLOWS / IN HONOR AND APPRECIATION/ OF THE MEMBERS WHO ENLISTED / FOR ACTIVE SERVICE / IN THE GREAT WAR 1914-1919. / AND OTHER CONFLICTS

FOR OUR KING AND COUNTRY

PRESENTED TO THE CITY OF SYDNEY

IN HONOR AND APPRECIATION/ OF THE MEMBERS WHO ENLISTED