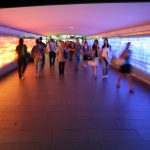 Marylin Fairskye’s Material World was installed in 1999 as part of an upgrade to Railway Square. There are three components to the artwork – light towers and windscreens above ground in Railway Square itself, and the light boxes in the tunnel walkway under the Square. Each part consists of four elements that relate to the four material elements – earth, water, fire and air.

Railway Square, behind Sydney’s Central Station, was once the site of the original colonial tollway into and out of the city. Fairskye created the light boxes ‘to echo the idea of the vanished gateway into the city’. They are integrated into the architecture of the tunnel, and work in balance with the vertical towers above ground.

The full effect of the piece depends on the space itself, and the movement of people through the tunnel. As you hurry past, , the digital images appear to move and change. Now and then, the hidden image of a face appears and then disappears.

The Material World light boxes are designed to be experienced in motion, by the thousands of people who hurry through the tunnel each day.

Merilyn Fairskye is a visual artist who began her career began as a painter and a mural artist, and later started to create screen-based works, photo-media and installations.

Her work is exhibited nationally and internationally and can be found in both public and private collections across Australia, North America and Europe.

Fairskye has won numerous awards for her work, as well as commissions for public artworks which remain on display at sites across Sydney, as well in Queensland and Tasmania.