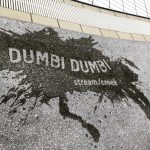 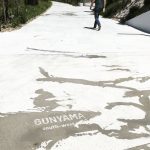 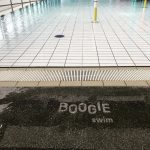 “Words from the local Aboriginal languages that originated from Country are revealed by water. The words reflect that the Country of Gunyama is a watery place.”

Marray (meaning wet) is an interpretive design work with deep connection to place and cultural heritage is revealed only by water. This unique discovery piece is incorporated into Green Square’s Gunyama Park Aquatic and Recreational Centre, surrounding the edges of the pools and wetland landscaped pathway. It’s an incredibly poignant application of water – with splashes from lap swimmers and children playing revealing the original languages spoken at this site.

Local Aboriginal words spell out water-themed reminders of the cultural heritage of the site including boogie (swim), bulangaang (salt water), miluny (mud) and murra (mullet). The variety of language used reflects Gunyama’s history as a place where many clans gathered.

Words from the local Aboriginal languages are revealed by water. As is the protocol to speak the language of the land, the words originate from local original languages of Sydney that originated from Country. The words reflect that the Country of Gunyama is a watery place, and that the original plant of Gunyama before colonisation impacted the place was the eastern suburbs banksia scrub, now an endangered species.

Local languages including Dharug and Dharawal are actively being recovered by language speakers and have many shared words. The words were decided through consultation with local Traditional Custodians, the cultural authorities of the Sydney region.

This work is an outcome of the Gunyama indigenous interpretation strategy, developed and authored by Djinjama and collaborators. It’s designed to act as a high-level visioning tool that can be used now and into the future to support the integration of the landscape, public art and signs at Gunyama Park Aquatic and Recreational Centre to create a unique place that recognises and celebrates Aboriginal stories and heritage in the built environment.

The strategy includes values and principles that should guide future work at Gunyama Park Aquatic and Recreational Centre, objectives for any development, themes and narratives with a focus on Indigenous cultural heritage, and aspirational recommendations for future work.