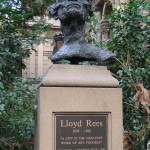 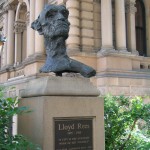 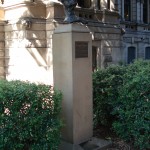 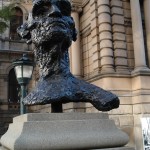 The sculpture is a life-sized bust of Australian painter Lloyd Rees. It features a roughly granulated bronze surface and is mounted on a tall pedestal made from Nondabyne sandstone to match the Town Hall and St Andrew’s. It is located in a small area of garden outside the Town Hall on the corner of George and Druitt Streets.

Lloyd Rees was an Australian landscape painter who twice won the Wynne Prize for his landscape paintings. Throughout his long creative life, Rees always loved cities and expressed this love through paintings and drawings. Though the form of his art changed over time, he retained his interest in interpreting the character, the architecture, the public sculpture and the elements of nature in the cities he adored. Sydney, along with Brisbane, was on his list of favourite places.

The artist, Lawrence Beck, designed the sculpture to reflect the sunlight, which Rees loved and portrayed so consistently in his work. The daily movement of the sun over the sculpture’s rough textured surface, he contended, would create an impression of change.

The sculpture was also designed to project the idea of Rees’ ‘perspective, kind and incredibly tough character’ across a square or street. Of equal importance, the site harmonised with Rees’ views on his surroundings: Rees considered that St Andrews, the Town Hall and the Queen Victoria Building were ‘the three best Victorian buildings in the world’.

The inscription chosen for the sculpture is also full of meaning: it helps to synthesise the artist and his message by the way of Rees’ stimulating assertion that a ‘city is the greatest work of art possible’. At the same time it opens up a new interpretation of the city theme, suggesting an inner and deeper meaning to the visual impact, while serving as a subtle reminder of Rees’ important contribution to the development of architecture training in Sydney, through his innovative work with students.

Lawrence Beck (also known as Lawrence Gundabuka) was born in 1942 in Forbes, NSW. He studied at Julian Ashton’s Art School in Sydney (1959), at East Sydney Technical College under Lyndon Dadswell (1960-1962), at Hornsey College, London (1962) and at the Nikolai Povovich Academy of Fine Art in Bulgaria (1964-1966). He has won numerous awards and a collection of his work is held at the National Gallery of Sofia, Bulgaria.

Although the City of Sydney acquired the bronze bust in August 1984, the decision as to a suitable location was delayed and its installation did not take place until 1990, two years after Rees’ death. In the meantime, a number of locations were considered. Finally, in keeping with suggestions from the sculptor, the bust was installed in a small area of garden near the north-east corner of the Town Hall.

Creating this sculpture presented a particular challenge for Lawrence Beck who had known Lloyd Rees since 1975. Beck had ‘often pondered the extremely difficult problem of portraying … [Rees] in three dimensions’. It was not until 1980 when travelling in southern France, home of Rees’ maternal ancestors, that Beck sensed a solution and was later able to create this memorial.

A City is the greatest work of art possible

by The Right Honourable the Lord Mayor