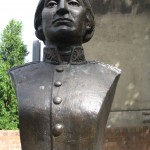 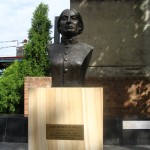 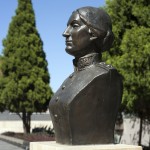 This bust of Juana Azurduy de Padilla is made from bronze and mounted on a striated sandstone plinth. Azurduy de Padilla wears a high collared coat with patterns around the collar. The surface of the bust appears quite rough and fabrication marks can be seen.

It faces east and is located in the Plaza Iberoamericana on Chalmers Street, close to Central Station. It is one of a series of busts of famous Latin American heroes on display in the plaza commemorating the contribution of Spanish and Portuguese speaking people to the history of Australia.

Juana Azurduy had managed to form a small “republiqueta” (little republic) with the territory her small army held. This republiqueta was basically under siege from 1810 until 1825 when other republican armies under Simon Bolivar were able to join her remote forces.

The bust was sculptured by V. Zapana from La Paz, Bolivia, whose name is engraved on the lower right side of the bust.

The bust is believed to have been installed in the Plaza Iberoamericana in 1994-95. It is associated with the Bolivian community in Australia.