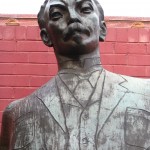 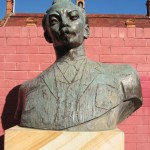 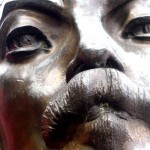 It is one of a series of busts of famous Latin American heroes on display in Plaza Iberoamericana on Chalmers Street commemorating the contribution of Spanish and Portuguese speaking people to the history of Australia. Unlike the other busts, Jose Marti is mounted on a brick plinth rather than sandstone.

Jose Marti was born January 28, 1853 in Havana, Cuba and died on May 19, 1895. He is regarded as a Cuban national hero for fighting for Cuban independence. He was also a poet and journalist.

In a letter dated 10 July 1991, the Consul-General for Cuba advertised that the Cuban Community of Sydney wished to present a bust of the Cuban national hero, Jose Marti, for installation in the Plaza Iberoamericana. This statue was unveiled in early October 1991, despite Council’s apparent concern that it was quite large in comparison to the existing statuary.

A plaque on the sandstone plinth reads: “Jose Marti / (1853-1895) / National hero of the Republic of Cuba. Teacher, / Journalist, politician, writer and poet. Inspired / the Moncada Barracks attack of July 26, 1953. / Jose Marti embodied the dream and struggle for / a unified Latin America. Died fighting for Cuban / Independence on May 19, 1895.